Nasser and Mathieu in control as empty quarter stages begin 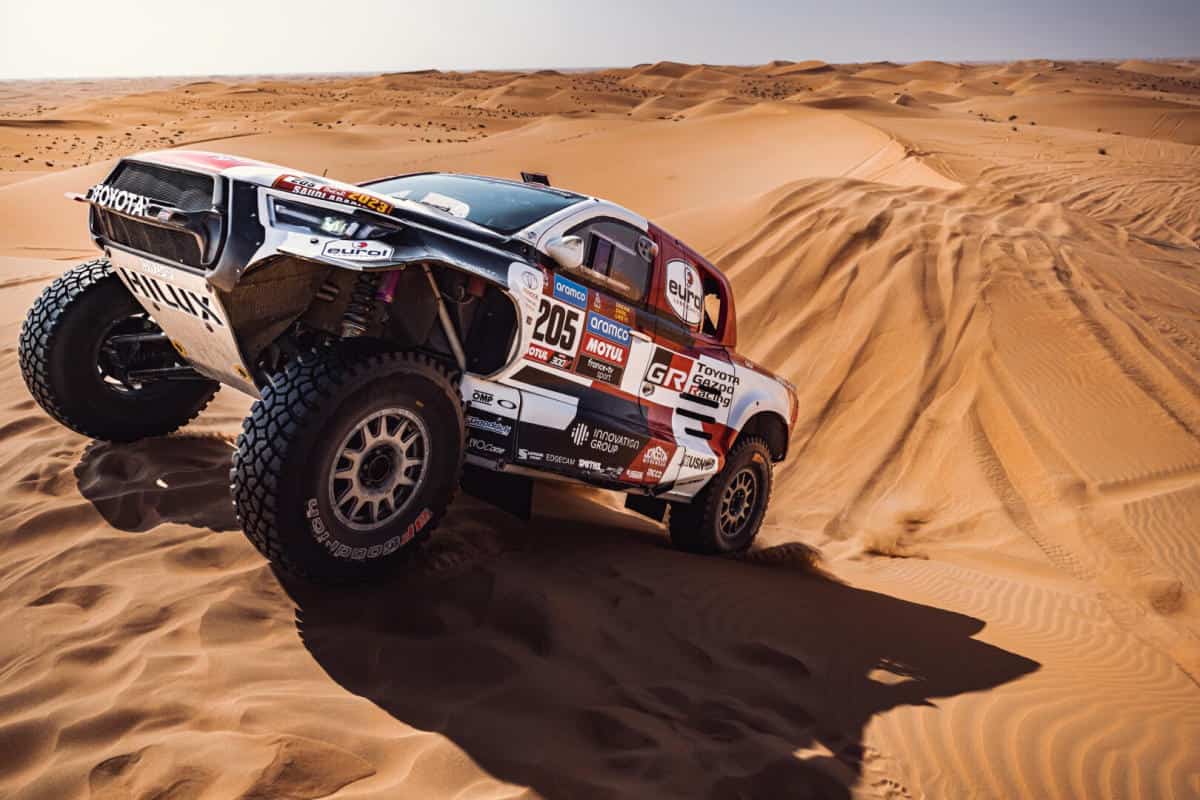 The 2023 Dakar Rally moved to the much-feared Empty Quarter of Saudi Arabia on Stage 10, as competitors tackled a short, sharp stage of only 114km. However, all the crews reported that the stage was unexpectedly difficult, with the winners requiring 1hr 48min 32sec to complete the gruelling stage. Nasser and Mathieu recorded the 4th-fastest time of the day in their GR DKR Hilux T1+, finishing 5min 45sec behind the winners. This allowed them to maintain their position at the head of the field without any problems.

They rested easy in the knowledge that teammates Giniel and Dennis were close behind them, carrying some spare parts in case the overall leaders required support. For the South African pairing, this role required them to allow Nasser and Mathieu to pass them early in the stage, as Giniel and Dennis were ahead on the road. Despite holding back during the opening part of the stage, they still went 22nd-fastest, losing just 12min 24sec to the winners on the day. They remain in 5th place overall, having extended their buffer to the crew behind them during Stage 10.

For Henk and Brett, Stage 10 brought an opportunity to strike back after the difficulties they experienced on Stage 9. However, the stage proved tougher than expected, with many tricky sections to negotiate. They had a clean run, recording the 9th-fastest time, just 7min 59sec behind the winners. They now find themselves holding steady in fourth overall, 1hr 48min 37sec behind the lead.

Lucas Moraes and Timo Gottschalk, driving a privately entered version of the Toyota Hilux T1+ are still in second place overall, 15min 49sec ahead of the crew in third place. They were third-fastest on Stage 10, relinquishing only 5min 22sec to the chasing pack.

Only four stages remain in the 2023 Dakar Rally, with Stage 11 representing the ‘out-leg’ of the Marathon Stage. The 275km-long stage will see the competitors race away from the main bivouac near Shaybah, to a remote encampment where they will have no service crew to support them – any work or repairs that need to be done on the cars has to be done by the driver and co-driver themselves, with the assistance of only fellow competitors. Stage 12 will see the competitors return to the main bivouac for a normal service at the end of the day.

The penultimate stage of the rally stretches from Shaybah to Al-Hofuf, along the Saudi border with the United Arab Emirates, before the final stage takes the rally from Al-Hofuf to the coastal city of Dammam on January 15th.

Glyn Hall, TGR Dakar Team Principal: “Today, all three our crews did exactly what was required of them. Nasser and Mathieu kept out of trouble, maintaining their position at the top. At the same time, Henk and Brett recorded a good stage result, so they’ll have a better road position tomorrow. Finally, Giniel and Dennis played a perfect supporting role to Nasser and Mathieu, but even so, their stage result was very good.”

Nasser Al-Attiyah: “Yes, it was a short stage, but it was a tough one! It took us a long time to complete the stage, but I’m happy to be into the proper dunes now. I also think today was a good test day for the next two days, and we know exactly what we need to do for the Marathon Stage. But the most important step today was to finish the stage without any problems, which is exactly what we did.”

Giniel de Villiers: “A tough stage! Never let a short stage fool you. This was only a 114km stage, but 114km in this terrain isn’t easy at all, and it required full concentration throughout. In the beginning we took it easy in order to let Nasser past, and after that we really just followed him through to the end of the stage. There was some dust in the middle of the stage, but nothing major. Today’s stage gave us a good indication of what to expect over the next few days.

Henk Lategan: “Not an easy stage at all, full of dunes. Very tricky, and the tracks of the guys ahead didn’t really help, as the track was already churned up badly. Even so, I’m glad we managed to get through the first proper dune stage.”