The new Volkswagen Amarok, a pick-up that acts as a multi-tool, will be on the market soon and 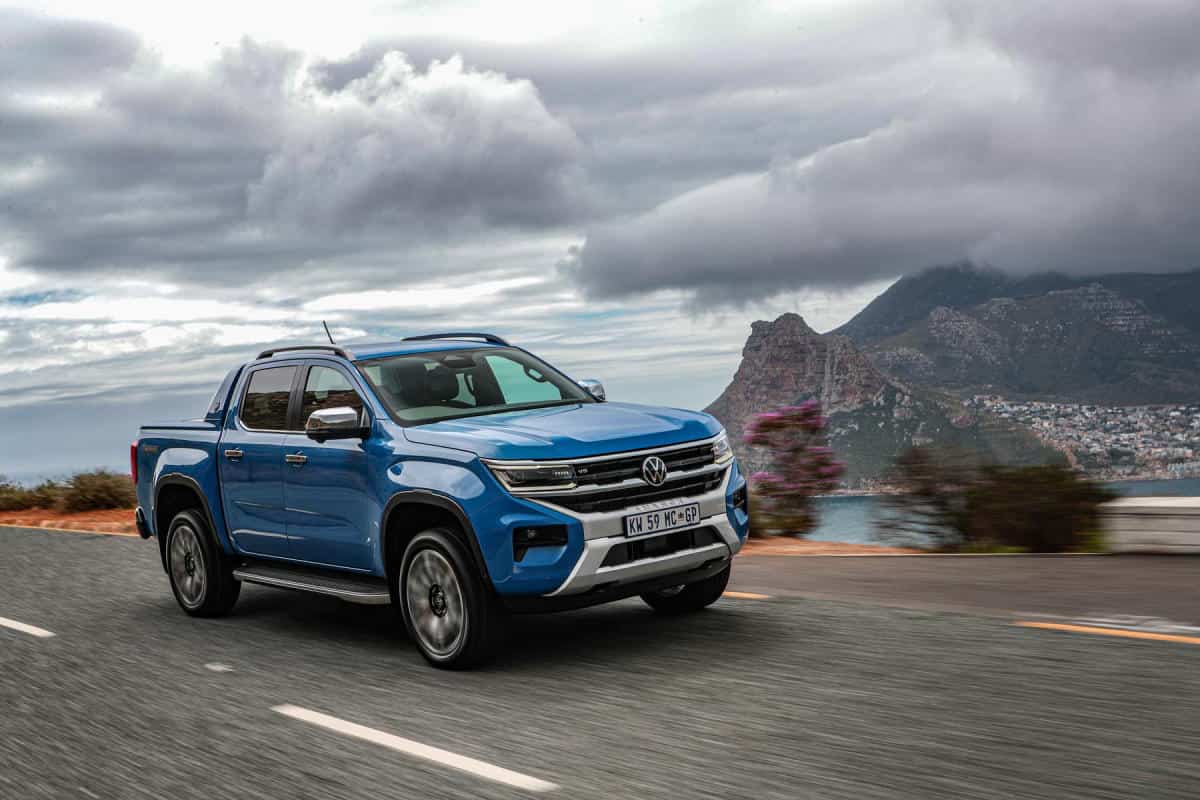 Hannover/ Cape Town, 29 November 2022 – The new Amarok is all set for launch. A ‘can do’ pick up, a multi-tool on wheels – meticulously thought-out from cab to cargo box. Propelled by powerful and efficient turbocharged engines and two different all-wheel drive systems. Depending on specification, more than 25 assistance systems, display units with up to 12.3-inch screens, a practical mix of digital and analogue controls and high-quality materials provide for clear advances on board compared to its predecessor, of which over 830,000 were sold.

The new Amarok has been designed by Volkswagen Commercial Vehicles to go wherever it needs to go. In Europe and many other parts of the world it therefore comes as standard with all-wheel rather than pure rear-wheel drive. Up to five efficient four and six-cylinder turbo engines deliver the drive system power required for work and non-work tasks. The new Amarok is in addition being offered in five equipment versions. They are the ‘Amarok’, ‘Life’ and ‘Style’ lines, plus the top versions ‘PanAmericana’ (off-road styling) and ‘Aventura’ (exclusive styling). The new Amarok has been designed as a four-door pick-up with a double cab {DoubleCab) and – for markets outside Europe – as a two-door version with a single cab (SingleCab).

At 5,350 millimetres, the new Amarok is 96 mm longer than its predecessor. A wheelbase of 3,270 mm represents an increase of 173 mm. That provides more room in the double cab. The wheelbase has become disproportionately longer – reducing the body overhangs. That results in crisper proportions and improved off-road capability, as the Amarok DoubleCab’s ramp angles have been enhanced, being now up to 30 degrees at the front and 26 degrees at the back.

Dependent on the market, the engines being used for the new generation Amarok112 are up to four turbo diesel engines (TOI with four or six cylinders) and a turbocharged petrol engine (TSI with four cylinders). Qualities common to all five engines are efficiency and high levels of torque. On, for example, African markets the base engine specification is being offered: a TOI delivering 110 kW (150 PS)1. In terms of power output the next engine for many markets of the world, thus also including Europe, is a 2.0-litre four-cylinder TOI delivering 125 kW (170 PS)2. At the third TOI power output level Volkswagen Commercial Vehicles is offering a four-cylinder engine with bi-turbocharger, which in Europe develops 151 kW (205 PS)2. Available as the new top TOI will be a V6 engine that, in the version meeting the Euro-6 emissions standard, delivers 177 kW (240 PS)2. In countries such as Australia, New Zealand and South Africa the two more powerful TOI engines even reach a power output of 155 kW (210 PS)/ 184 kW (250 PS)1. For markets where petrol engines are dominant in the pick-up sector there is a four-cylinder TSI delivering 222 kW (302 PS)1.

In Europe all Amarok automatic transmission versions are allowed to tow trailers with a weight of up to 3.5 tonnes. Outside Europe the maximum towing load, including for the versions with manual transmission, is 3.5 tonnes. Compared to its predecessor the permissible total weight of vehicle and trailer has increased worldwide from 6.0 to 6.5 tonnes. The maximum payload of the double-cab pick-up has gone up to 1.19 tonnes.

In Europe and many other countries the Amarok is being supplied with all-wheel drive (4MOTION) as standard. Depending on engine version, two different 4MOTION systems are being used here: one selectable all-wheel drive with three drive modes, and a top version with four drive modes. As an additional fourth mode (4A), the top version offers a variable and thus automatic power distribution between the front and rear axles via a multi-plate clutch. An optional differential lock and intelligent ‘Drive Modes’ top off the all-wheel characteristics.

The pick-up’s body now has a powerful look. “For the new generation we have significantly modified the Amarok’s archetypal design. It is now unambiguously more expressive and even more impressive”, says Albert Kirzinger, Head of Design at Volkswagen Commercial Vehicles. The new, charismatic front section is a statement in itself. Especially striking: the straight and very upright bonnet with unambiguous Volkswagen DNA.

The same applies to the bars running horizontally across the radiator grille with the concisely integrated LED headlights, which come as standard on all versions. The lights used on the Amarok PanAmericana and Amarok Aventura, as well as in some countries on the Amarok Style, are the ‘IQ.LIGHT – LED headlights’, which are new to this product line. They provide interactive carriageway illumination and create an unmistakable light design. Below the transverse bars, the radiator grille unit merges depending on version into a further horizontal level of the front section or – in the case of the PanAmericana and Aventura – into an X­ shaped design. Embossed above the number plate holder of both top models is the word ‘Amarok’. To the left and right of it: the LED fog lights (included as standard on the Life and above).

A typical Amarok design feature is represented on the side by the half-round wheel arches. In contrast to many other pick-ups, the upper termination of the wheel arches forms a practically straight line here rather than a circular one. The wings above the up to 21-inch alloy wheels also have a distinctive look and around the wheel arches are clad with robust plastic. The rear section too makes the vehicle’s DNA clear: beneath the VW badge the word ‘Amarok’ is embossed across almost the entire width of the tailgate. The outer frame of the rear section is formed by the tail lights, which reach far into the silhouette. On the top PanAmericana and Aventura versions they are in a (­ shaped design, and LED as standard.

With its practical controls and digital screens, the interior has been configured by the Volkswagen Commercial Vehicles design team in a very functional and high-quality way. The look and feel of the materials resemble those of premium SUVs like the Volkswagen Touareg. The instrument panel’s layout is clear, well structured, and ergonomically tailored to the driver. Even on the base version, the displays consist of the 8.0-inch Digital Cockpit (on the Style and above fully digital and 12.3-inch) and the portrait format touchscreen of the infotainment system (10.1-inch, Style and above 12.0-inch). It is also the case that Volkswagen Commercial Vehicles has achieved in the new Amarok an intuitively usable mix of digital functions and ergonomically designed buttons and rotary switches. The speaker volume of the infotainment system, for example, is adjusted via a rotary switch. The functions of the all­ wheel drive, the primary functions for parking, the air conditioning, the assist systems and the driving modes are controlled via buttons. Depending on equipment line, these robust switches have chrome look rims.

Large cargo box and payload of up to 1.19 tonnes

It is also strikingly spacious behind the double or single cab: in the cargo box. As was the case on the predecessor model, the cargo bed between the wheel arches has, at 1,227 mm, enough room for a Euro pallet loaded sideways or lengthways. With the tailgate closed the length of the cargo box is 1,624 mm in the case of the DoubleCab and 2,332 mm for the SingleCab. The SingleCab version can therefore even take two Euro pallets sideways on. The load is secured via robust lashing rings on the cargo bed and side walls. The maximum height of the tail lift has also increased, dependent on specification, by as much as 21 mm to now 529 mm.

An interesting fact for globetrotters is that the static roof load capacity has gone up to 350 kilograms – sufficient, for instance, for a roof tent. Either ex-factory or in the range of accessories, there will be features such as alloy wheels up to 21-inch in size, all-terrain tyres (up to 18-inch) and a diverse array of trailer mounts. Also available for the cargo box will be useful details such as a bike holder, a multi-functional carrier system, different roll covers, diverse designs of the styling bar, and a sports bar (the latter exclusively for the Amarok Aventura). There will once again be a hardtop for the cargo bed, which effectively transforms the pick­ up into an SUV with the load capacity of a van.

The new Amarok is being produced in South Africa. In parallel with the continual ramping up of the daily unit numbers, Volkswagen Commercial Vehicles is beginning the worldwide launch. It starts in the first few countries before the end of the year. Most markets will follow in 2023. In the course of next summer, the new pick-up will then be available to order in almost every country of relevance to this model.