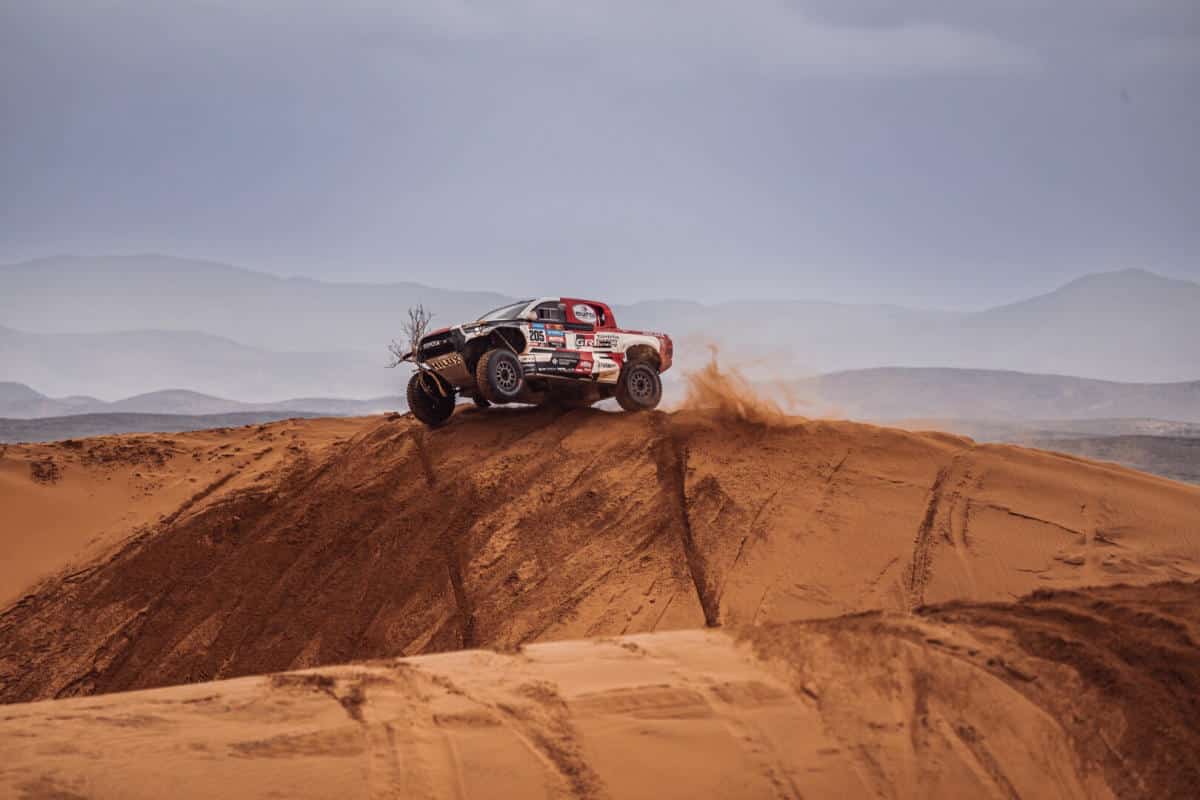 Dakar 2023 has reached its Rest Day, in the Saudi Arabian capital of Riyadh. This is a day of rest for the drivers and co-drivers, but for the technical crews, it is a day of significant maintenance in preparation for the final week of the race. This year’s Dakar Rally is somewhat unique in the sense that Rest Day came one stage after the mid-point of the event, leaving TOYOTA GAZOO Racing with six stages to contest, before the event finishes in the city of Dammam on January 15th.

For TGR, the opening week of the rally could hardly have gone better. Nasser Al-Attiyah and co-driver Mathieu Baumel recorded the second-fastest time in the opening stage, trailing the winners home by just 2min 12sec. The TGR crew moved into the lead on the very next stage and have retained that position all the way to the Rest Day. Save for the odd puncture, their GR DKR Hilux T1+ has run faultlessly despite the harsh terrain of the opening week, and Nasser and Mathieu find themselves 1hr 3min 46sec ahead in the overall standings, with six stages to go.

Dakar 2023’s Rest Day also marked a significant result for Henk Lategan and co-driver Brett Cummings, competing in their third Dakar Rally. The South African pairing had an up-and-down start to the event, posting the 10th-fastest time in the first stage, before conceding 53min 12sec on the second stage. From that point onwards, however, they haven’t recorded any stage results outside the Top 10 and have moved into second place in the overall standings, behind their TGR teammates.

For veteran racer Giniel de Villiers and co-driver Dennis Murphy, a raft of punctures early in various stages forced the pair to slow their pace into ‘survival mode’, as cars in the T1+ category are only allowed to carry two spare tyres. Early punctures cost the pair significant time, though they’ve shown that they can mix it up at the head of the field, going 6th-fastest on Stage 2, and 4th-fastest on Stage 7. The pair were up to 4th in the overall standings, before relinquishing one position after a particularly harsh stage again caused two early punctures, and they find themselves in 5th place overall at the Rest Day.

The privately entered GR Hilux T1+ of Lucas Moraes and co-driver Timo Gottschalk is up into third overall, with the Dakar rookie driver showing his class throughout the race to date. Including Moraes, Toyota occupy four of the Top 5 positions at the Rest Day – a remarkable achievement, especially given the harshness of the terrain experienced thus far in the race.

The Rest Day is often a mental turning point in the rally, as crews find themselves heading towards the finish from this point forward. For TGR, this year’s Rest Day also brought a visit from FIA President Mohammed Ben Sulayem, who spent some time with our drivers and co-drivers in the pits at the Riyadh bivouac.

Next up is Stage 9, which will see the crews leave Riyadh for the city of Haradh, via a special stage of 359km. The stage will feature a liaison of 108km between Riyadh and the start; as well as another liaison of 220km from the end of the stage to the bivouac at Haradh. From Haradh, the rally will head into the so-called Empty Quarter for three stages, including a marathon, before heading back up the coast towards the finish in Dammam on January 15th.

Glyn Hall, TGR Dakar Team Principal: “The Rest Day is, in fact, a day of frantic activity in the bivouac. For us, it is critical to do all the maintenance needed to ensure that the cars are in the best possible shape for the final six stages. Bear in mind that this is still more stages than any of the other W2RC rounds, and we simply cannot afford any mistakes.”

Nasser Al-Attiyah: “The Rest Day is always a significant marker in the race. From here to the finish is still a long way, but now we know that we have a good lead and must continue to protect it for six more stages. The GR Hilux has served us well to this point, and we have a lot of confidence in the car.”

Giniel de Villiers: “I can only hope for fewer punctures in the upcoming week of the rally, as we’ve had a torrid time of it so far. We’ve lost a lot of time having to drive in survival mode, but with a bit of luck, we can get back on the attack in the sands of the Empty Quarter.”

Henk Lategan: “Being at the Rest Day in second place on the Dakar is a dream result for me. However, I realise there are still many stages to come, starting with the longest stage of this year’s rally. Anything can still happen, but for the moment we are very happy with our current standing.”

All systems go as preparations for schools to reopen are underway, says department of education