The armed men approached a security guard and threatened him with a firearm before getting into the store. 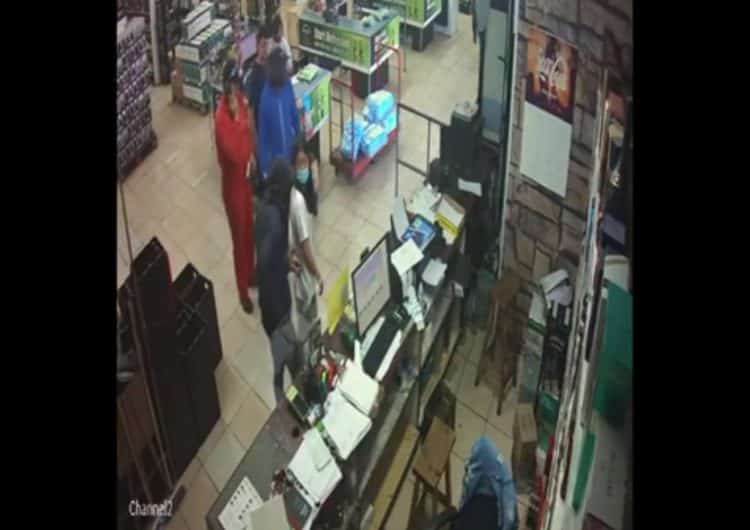 Police are investigating the video footage of the woman kidnapped in a liquor store. Photo via Twitter: @Abramjee

A shocking video footage has surfaced of a gang of armed men abducting the owner of the liquor store’s wife in Belville, Cape Town.

The kidnapping took place on Wednesday morning at around 11:45 at Blue Bottle Liquor on Stand Road. SAPS in the Western Cape have confirmed that they are now investigating the incident, which has since gone viral online.

In the video footage which has been making rounds on social media, the scene begins by playing out as just an ordinary day at the liquor store.

The footage lasts less than two minutes and shows a woman sitting behind the counter while another attends to customers behind the till.

The woman in the white t-shirt starts speaking to the men both showing their faces to the camera. One of the customers, a man who appears to be wearing a red overall and a cap shows the woman a small piece of paper.

Halfway into the footage, the shady figures start to surround the Chinese nationals. It is understood that the woman in the clip is the store owner’s wife.

The woman looks back in shock and another man, wearing a blue overall top, helps him escort the woman out of the store.

The man wearing the red overall is on his phone but makes no attempt to stop the men.

At that point, seven people are seen in the shop and five of them are seen walking away from the camera calmly, while the other two men take the woman wearing in white away.

“SAPS can confirm that an investigation has been initiated following a kidnapping incident this morning (Wednesday) around 11:45 in Belville,” said Lieutenant Colonel Andre Traut, the police spokesperson.

“Three armed men approached a security guard at a liquor store in Strand Street and threatened him with a firearm,” he said.

“They then proceeded to the 27-year-old wife of the store manager and forcefully removed her from the premises, where after they fled the scene in a VW Polo. Arrests are yet to be made.”

Lotto and Lotto Plus Results for Saturday 22 October 2022