The IFP is currently the official opposition in KwaZulu-Natal and runs various municipalities. 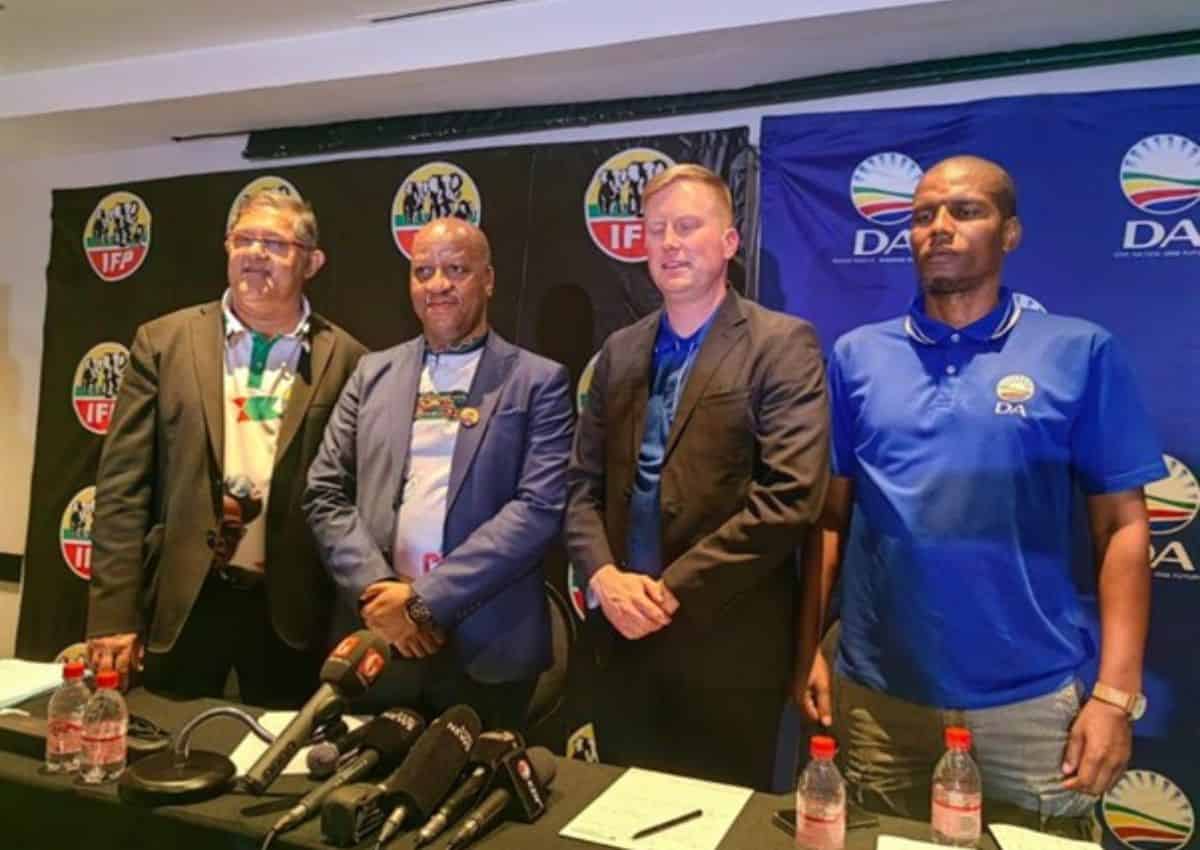 Leaders of the IFP and DA hold a press briefing to outline plans to weaken the ANC in eThekwini. Photo via Twitter: @GagasiFMNews

The Democratic Alliance (DA) and the Inkatha Freedom Party (IFP) have joined forces in a bid to weaken the already fragile power of the ANC in the eThekwini municipality.

The DA will ask its voters to consider casting their votes for the IFP in the Ward 99by-election in Umkomaas to oust the ANC.

The parties say they are planning to weaken and unseat the African National Congress (ANC) in the province.

The IFP is currently the official opposition in KwaZulu-Natal and runs various municipalities.

Meanwhile the DA enjoys good support in various parts of the province which includes the provincial legislature.

The move to join forces was announced at a joint press briefing at the Elangeni Hotel on Tuesday where the two parties cemented their intention to oust the ailing ANC in eThekiwin.

“The DA’s constituency head for Umkomaas Ward 99, Tim Brauseth, will be going out to explain to voters why we have done this, and why it is in their best interest to allow the IFP to contest, with consolidated opposition support behind them,” said Dean Macpherson, DA KwaZulu-Natal chairperson.

He added: “That this is our message to them. If enough opposition voters get together and work together, we can get the ANC out.”

The DA will not be instructing voters to vote for the IFP but explained the decision to not contests as “strategic” as the IFP enjoys bigger support in ward 99.

IFP chief whip and treasurer Narend Singh said they wanted to send a strong signal to smaller parties that they could “alter the dynamics in eThekwini”.

“South Africans know the ruling party has failed. Everywhere you look, there are failures. South Africans deserve better, and we can give you better as a collective of political parties.”

There is a fragile coalition in eThekwini with the ANC, after its failure to secure a majority, relying on the Abanu Batho Congress (ABC), Singh said.