David Mabuza avails himself for another term as deputy president

I will serve the ANC until I die in whatever capacity, whether I am in a position. The branches of the ANC will decide. 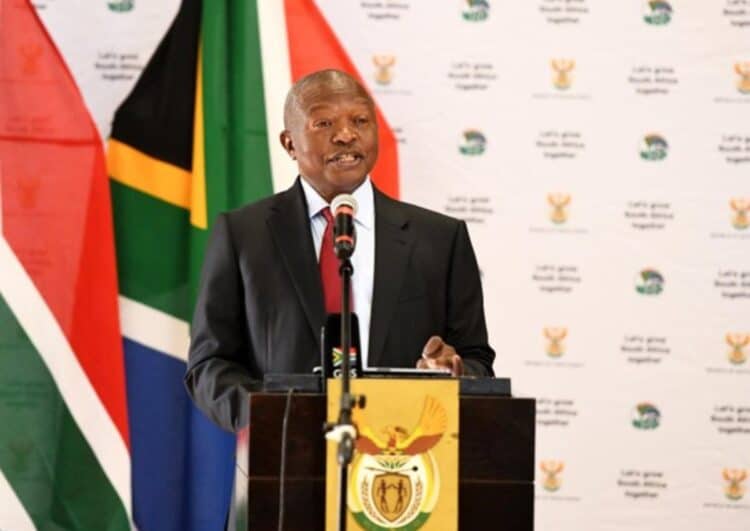 African National Congress (ANC) deputy president David Mabuza says he remains ready and available to return to his office as the party’s second in command.

The deputy president says he is ready to stand for a second term with less than two months left before the party heads to its December national conference to elect its new leaders.

Mabuza faces a tough competition for the ANC’s second in command position with the likes of Paul Mashatile and Ronald Lamola having been nominated ahead of the December conference.

“I will serve the ANC until I die in whatever capacity, whether I am in a position. The branches of the ANC will decide. If they wish so, they can nominate me to proceed as the party’s deputy president and I will accept,” he said.

He was speaking to journalists in Johannesburg’s South Hills, after handing over a house he bought for Zodwa Nhlapo- the former personal assistant to the late struggle icon Winnie Madikizela-Mandela.

Mabuza also rubbished claims that he was attempting to cling onto his position in the ANC top six as “rumours”, saying he did not belong to any slate of the party.

He said he wanted to meet with other ANC leaders with the view to unite the party ahead of the much-anticipated elective conference set to take place from 16 to 21 December in Nasrec Johannesburg.

“I am thinking about, and I am looking at an approach of how I should approach it [engaging other ANC leaders] to pull things together,” Mabuza said.

He also weighed in on the long list of party members seeking to replace him and party president Cyril Ramaphosa.

“Let’s allow the democracy to set in, in the ANC and I’m sure beyond this point, we’ll be in a position to settle with the succession process in the ANC, but this process, we’ll have to go through. It’s part of our adaptation process.”

Early childhood education is key to breaking the cycle of poverty, but is faced with problems