Ramaphosa said the investment flows between the two countries were promising. 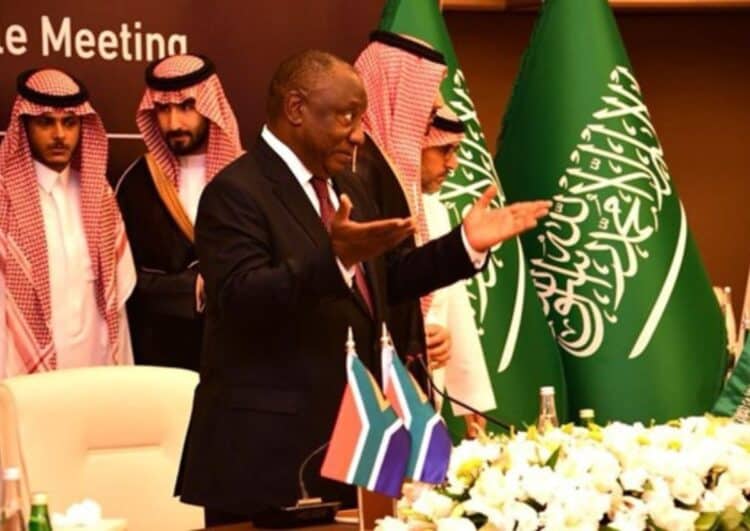 President Cyril Ramaphosa participates in Roundtable meeting with key captains of the industry on the sidelines of the South Africa-Saudi Investment Forum. Photo via Twitter: @PresidencyZA

President Cyril Ramaphosa laid on a charm in a bid to impress investors in Saudi Arabia, hoping to secure business deals which will boost the South African economy.

“Trade between the countries already totals $5bn and we think we can increase it much further in the next few years. South Africa stands particularly ready to increase the overall export of a basket of goods with Saudi Arabia to bring balance to the account,” he said.

The president, who is on a two-day state visit, arrived in Jeddah on Friday at the invitation of King Salman bin Abdulazizi Al-Saud and Crown Prince and prime minister Arabia Mohammed bin Abdulzizi al Saud.

Last week, South Africa hosted a Saudi government and business delegation in Pretoria, where it launched the Saudi-South African Business Council and held the 9th session of the Joint Economic Commission.

He said he looked forward to partnering the Saudi government in sectors such as mining, manufacturing of health products, chemicals, steel, cars, agriculture and food processing as well as energy and renewables.

“South Africa is a leading mining economy, and mining has been an integral part of our economic history for over a century. Local and international companies are active across many different value chains, from iron-ore to platinum and palladium, gold, diamonds, coal, chromium and many more,” said Ramaphosa.

Ramaphosa said South Africa was a “favourable, reliable and stable place” to conduct business, with “sophisticated financial systems” and Africa’s deepest capital market, as well as a robust and strong rule of law, protection of contracts and property rights.

“I want to call on Saudi business to be part of the renewed momentum of international investors coming to South Africa. Through a targeted outreach to global and local businesses we have so far attracted investment commitments to the value of approximately $70billion, and this number is growing,” he said.

David Mabuza avails himself for another term as deputy president