According to Helen Zille, R7 million was never accounted for in the R22 million ANC project. 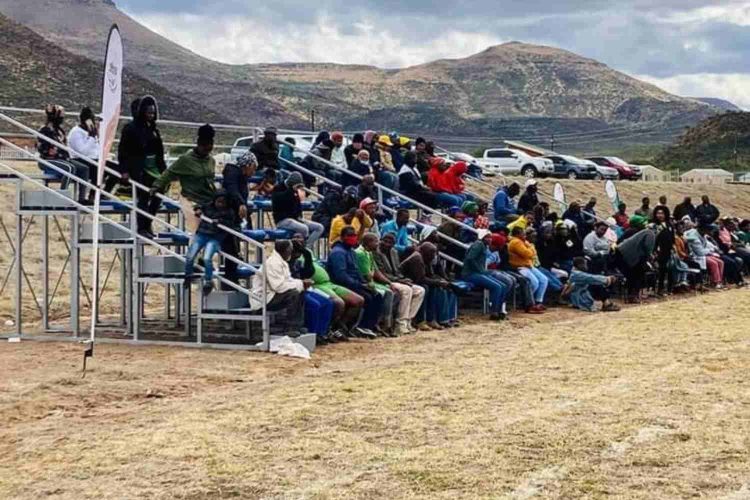 Zille, who’s on a short stay in Nelson Mandela Bay ahead of the 2021 local government elections, went on an oversight visit to the sports venue that’s made headlines recently.

According to the Enoch Mgijima Local Municipality, R15 million was spent on the development of the facility. However, images of the finished product were far from convincing, to say the very least.

Erected goalposts with no netting and bare steel bleachers are the only visible installations on the sports field. During her inspection of the construction work done by Thalami Civils, Zille confirmed a process has been undertaken to “insist on a full forensic audit into this project and other municipal projects which have failed dismally.”

The DA chairperson revealed the Enoch Mgijima municipality had earmarked R22 million for the stadium project. However, R7 million has never been accounted for, while the R15 million expenditure is the subject of an intensive probe.

The R15 million rand Lesseyton Stadium in the Eastern Cape is a manifestation of ANC municipal rot.

The DA will insist on a full forensic audit into this project and other municipal projects which have failed dismally. – @helenzille pic.twitter.com/DCzsJbdgFU

What we know about Thalami Civils

The mountainous surrounds of the Komani village would have made the Lesseyton stadium a dream sporting venue, had the ANC-led municipality led the project with honesty and integrity.

Instead, early into a probe over the whereabouts of missing millions, red flags have surfaced over the procurement process that was undertaken to award Thalami Civils the contract to deliver the facility to the Enoch Mgijima community.

The stadium, in its current form and with an expenditure bill of R15 million, has no running water, no electricity, no turf, bare goalposts on the verge of collapse, and an athletics track crafted from white chalky paint that withers as the days pass.

Luthando Jojwana is listed as the owner of the construction company that was tasked with delivering a modern sports facility to the Komani region.

However, murmurs have been rampant about claims that Jojwana may have meddled with ANC coffers in an alleged tender scam.

It’s said that Thamani Civils was not favourite to procure the tender when bidding started before the project was launched in 2018.

“The company comprises of qualified previously disadvantaged personnel, who have worked under established construction firms and the public sector on major projects for many years and they provide high level of professionalism, quality services,” the company’s ‘About Us’ page reads.

However, a look at Thamani Civils’ recent development of a taxi rank in Tsomo, Eastern Cape, a R4 million project commissioned by Intsika Yethu Local Municipality and ‘completed’ in 2019, speaks volumes about competency and, overall, possible money laundering.

Not only that but he was also arrested in 2017 for stealing bricks in Butterworth to finish off some work in Centane 😂😂😂😂 pic.twitter.com/Exbi5ctVnF

Eastern Cape MEC of co-operative governance and traditional affairs Xolile Nqatha called on a forensic investigation into the project, describing the Enoch Mgijima stadium as “a crime scene.”

“The fact that red tape that is used to cordon off a crime scene was used [to officially open the stadium]… there is a reason to forge ahead with an investigation,” he said.