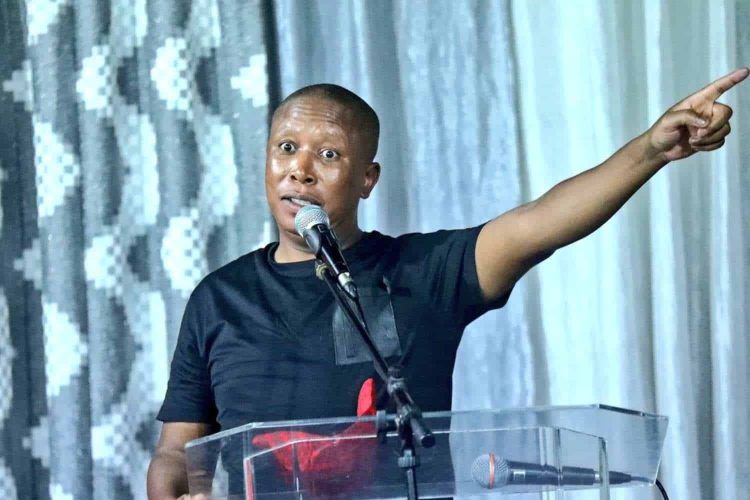 EFF commissar Julius Malema led his troops on a campaign coup in Emalahleni, Mpumalanga, where he took jabs at the ruling ANC leadership.

Dejected residents of the Mpumalanga town, where the ANC has enjoyed majority support for years, gathered around the EFF’s pop-up stage where Red Berets, including popular influencers Uncle Vinny and actress Ntando Duma, led anti-ANC chants in anticipation of Malema’s address.

The party’s commander-in-chief finally surfaced amid loud cheers from a faction of Emalahleni residents who feel hard done by the ANC.

Malema commenced with his electioneering, promising to achieve what the ruling party could never for the people of the Mpulanaga town. More jobs for the unemployed, whether or not they have a valid matric certificate, fixing roads and double increases on social grants, were some of the EFF leader’s wagers in return for votes on Election Day.

“We are here in our numbers and our government must be ashamed that Young people with a potential to work are here at a meeting instead of at job, but there are no jobs,” he exclaimed.

One resident took to the stage to share her testimony of life under an ANC-led municipality. The elderly woman, who lives off SASSA monthly grants, claimed that her husband’s murder remains a cold case with no effort shown by Emalahleni police. Also, she accused the ANC of heckling her with mounting rates bills when she can barely afford to keep food on the table.

[WATCH NOW 🎥]: Community member of Emalahleni broke down into tears crying to our CIC @Julius_S_Malema for assistance.

She lives with 5 bullets, her husband shot and burnt and this government keeps wanting money she doesn't have because she is a SASSA recipient. #VoteEFF pic.twitter.com/fgjTDINNWB

Another resident told her community members it was time the EFF got a chance to govern. This, in the woman’s view, was the only way for informal settlement communities to get high priority public service.

[WATCH 🎥]: Community member of ward 10 requests that when the EFF takes over, it recognizes and treats people who live in squatter camps like human beings because the current government does not see them for anything. All they want from them is votes. #LandAndJobsManje #VoteEFF pic.twitter.com/wdE3OxDWo0

Mpumalanga is one of the key regions targeted by the Red Berets in their bid to improve on 2016’s municipal election run.

Millions of South Africans will head to the polls on Monday 1 November to cast votes in what promises to be a fiery contest between the ANC, DA and EFF.