AMCU is believed to be behind the protest in Kempton Park. 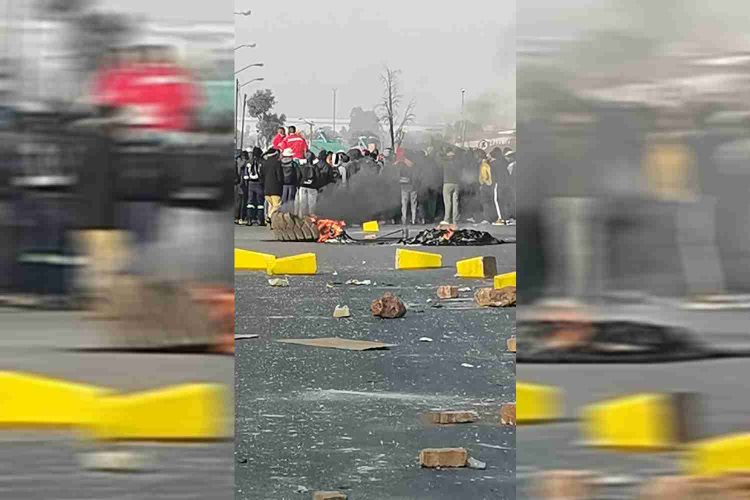 Protest action has broken out in Kempton Park, Ekurhuleni, on Tuesday, with motorists facing a day of traffic disruptions on the road.

Kempton Park protest: What are the protesters’ demands?

Main routes that are usually bustling with traffic in the East Rand region were blocked off to traffic with burning rubble, tyre and other heavy obstructions.

While authorities have been on the scene, monitoring the unrest, no arrests have been made thus far. It’s believed that the Association of Mineworkers and Construction Union (AMCU) is spearheading the Kempton Park protest.

In a notice sent to Elematic SA, a supplier of precast concrete technology, the trade union indicated that workers would be downing tools on Tuesday.

“The matter that will we will be striking for relates to mutual interest as per the CCMA certificate under case number GAEK 6117-21/GAEK 6103-21,” the union warned.

AMCU concluded its notice by stating that its door remains open for Elematic SA should they wish “to meet with us with a view of resolving the dispute.”

While we could not verify the merits of the CCMA matter currently ongoing between the company and its employees, several sources have claimed that Elematic SA workers are disgruntled over wages.

Here are a few videos that were taken on Tuesday, showing the level of devastation that’s been left on the main routes in Kempton Park.

At this time, a number of key routes have been closed off to traffic due to the ongoing unrest.

These are the roads motorists are advised to avoid on Tuesday:

At the time this article was published, law enforcement agencies were still on the scene observing the protest.