No Hands, No Feet but still waiting for Housing

Busiswa Pikinini, who has been waiting since 2010, is one of many disabled residents of Khayelitsha still hoping for government housing. 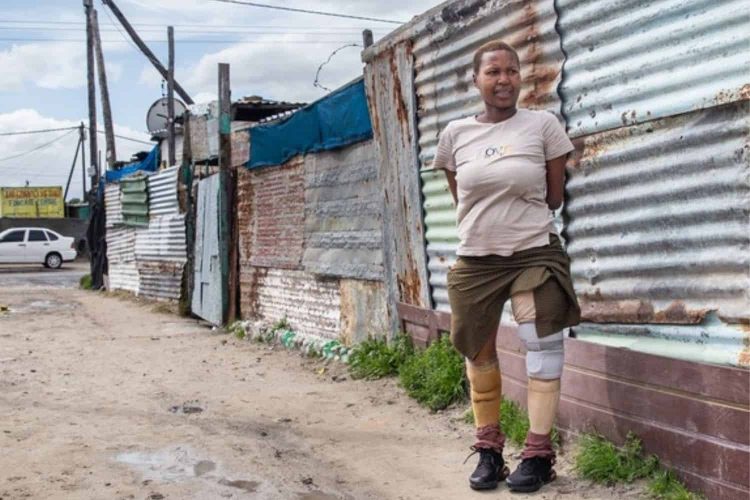 No Hands, No Feet but still waiting for Housing. Photo: Ashraf Hendricks

The elderly and people with disabilities are supposed to get priority on housing waiting lists. But in the informal settlements of Khayelitsha, Cape Town, some are still waiting after many years. Like Busiswa Pikinini, 27, who has no hands or feet.

Pikinini lives in a shack in RR Section, in Khayelitsha in Cape Town with four family members. She has been hoping for a house since 2010.

Pikinini, who was born with limbs ending at the knees and elbows, says she applied for a house 11 years ago when people she says were housing officials visited the area to register residents for housing. But spokespersons for both the City of Cape Town and the Western Cape Department of Human Settlements said Pikinini was not on the list.

Pikinini uses prosthetic legs which were organised for her when she was at high school. She is currently unemployed, but has finished a one year business administration learnership programme and is awaiting graduation.

She can cook, bath and dress herself, and can write.

“I can do most things even though I have no hands and feet,” says Pikinini. “But life is still a bit difficult living in an informal settlement. When it rains it leaks inside the house and it floods outside which makes it difficult to go to the toilet because the water blocks the pathway to the toilet. When this happens I have to ask one of my family members to carry me on their back and take me to the toilet because I can’t jump the flood,” said Pikinini, who is still hoping for a house.

Nomakula Eunice Mjadana, on the other hand, has given up hope of ever owning her own house.

The 81-year-old grandmother currently rents a small room in R Section in Khayelitsha. She was moved by a relative in February from her leaking, dilapidated shack in RR Section after she fell on her way to use the communal toilets.

The pathway from the shack where she lived was narrow, uneven and littered with wire fencing and soft sand.

“I fell and almost broke my leg. I use a crutch when I move around because my left leg is in a bad condition. I was lucky that a passerby saw and helped me get up and took me back to my shack.”

Mjadana lives with two of her granddaughters, aged 13 and 10, in a rented backyard shack. The shack is smaller than her old home, but does not leak, she says, and the toilet is a few metres away.

Mjadana says that like many of her neighbours in RR Section, she has been waiting years for a house. “I am registered for a house, but as far as what is happening with the application, I have no idea,” said Mjadana.

Malusi Booi, City of Cape Town Mayoral Committee Member for Human Settlements, said though she was on the 1999 database, Mjadana had “unfortunately not been selected for an opportunity yet.”

Booi said: “We have vast amounts of applicants in all areas with application dates prior to 1999.”

He said there were about 347,000 applicants with “waiting status” registered with the City’s Housing Needs Register. Of these, approximately 3,800 had disabilities, Booi said. The register was continuously updated.

“Since 2012, the City has delivered more than 60,000 direct opportunities to the benefit of hundreds of thousands of residents,” said Booi.

Department of Human Settlements spokesperson Nathan Adriaanse said the waiting list for the Western Cape as a whole was 550,000.

The two lists for Cape Town are the same. “The Western Cape Government sources beneficiaries from the City’s Housing Needs Register for their projects within Cape Town,” said Booi.

Adriaanse said the most vulnerable applicants were prioritised, including the elderly and disabled.

In the past two financial years, the department had delivered 15,866 housing units and 14,714 serviced sites, he said.