One of the inmates who escaped is facing charges of murder,attempted murder, kidnapping and robbery. 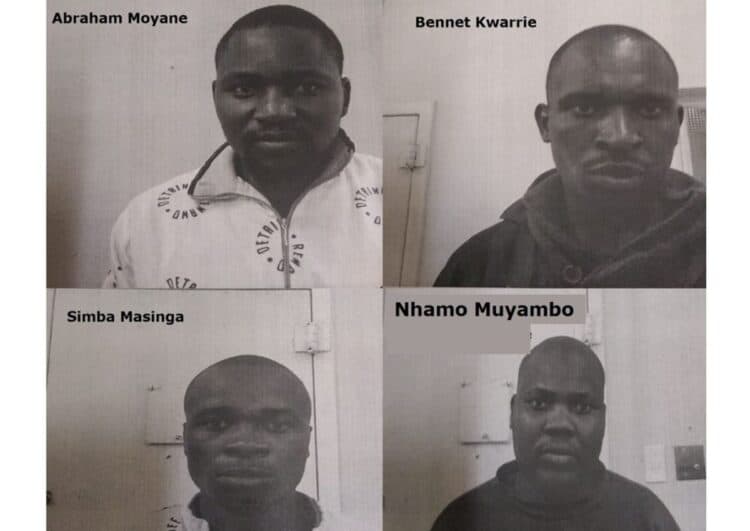 Photos of some of the inmates who escaped from Makhanda Correctional facility. Photo via Twitter: @SAPoliceService

Police in the Eastern Cape have launched a manhunt after seven dangerous inmates escaped from Makhanda Correctional facility on Tuesday, 18 October 2022.

According to Warrant Officer Majola Nkhohli, the police spokesperson, it is alleged that on Tuesday at about 04h00 the officer arrived for standby duties to visit the prison when she found that lights were on in one of the units.

“It was discovered that seven prisoners escaped through a windo. The circumstances surrounding the incident are forming part of the investigation,” Nkohli said.

One of the seven inmates who escaped from the Makhanda correctional facility is allegedly facing charges of murder, attempted murder, kidnapping and robbery, Nkohli added.

South African detainee Luvuyo September is among seven prisoners who escaped from prison. He faces charges of murder, attempted murder, kidnapping and robbery.

The other six are all Zimbabwean nationals, five of whom have been convicted of rhino poaching, namely, Mhambo Muyambo, Francis Chitho, Trymore Chauke, Abraham Moyane and Simba Masinga.

Police are warning the public that these criminals are very dangerous and should not be approached- instead police must be contacted, Nkohli said.

“We are also urging communities not to protect these criminals as they will be committing an offence if found to be aiding and abetting them,” Nkohli added.

Anyone with information about the whereabouts of these criminals is urged to contact the investigating officer, Detective Captain Glen Peter on 082 301 9427 or Crime Stop on 08600 10111 or the nearest police station.