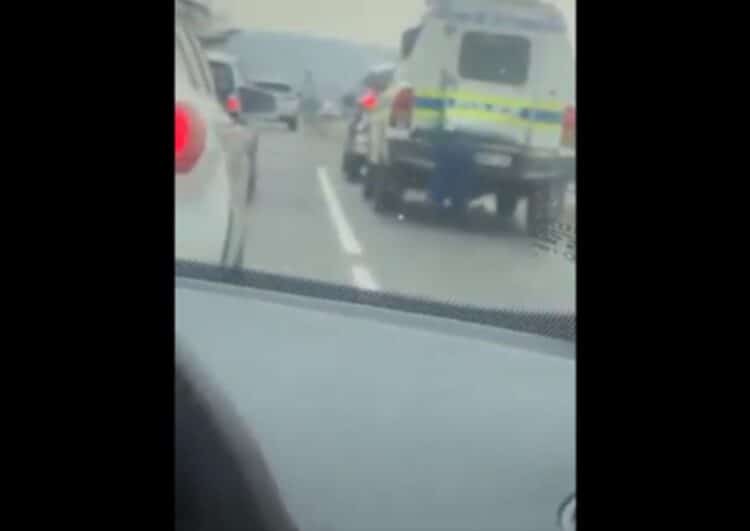 An arrested suspect squirms out of the police van and escapes. Photo via Screenshot/Video/Twitter.

Police have launched an investigation after motorists witnessed an arrested man pulled off an escape from a police van in the middle of traffic in broad daylight.

The video of the escape has gone viral on social media.

“The national police commissioner is also concerned about this, and we are going to find out in which province it took place.”

In the 11 seconds video footage that has gone viral, the police van can be seen in traffic which appear to be at a standstill.

What happened next took motorist behind the police van by surprise as the arrested man dressed in blue pants and a green top kicked the door which appeared to be locked and squirmed his way out of the vehicle.

The man then fell on the ground before he began to sneakily run away. This all happened with the police not being able to notice anything.

Build One South Africa leader Mmusi Maimane, posted the video on his Twitter account, with the caption: “We do not have a police service?”

Meanwhile, in an unrelated incident, the former Democratic Alliance (DA) leader was left traumatised after he was robbed at a nightclub earlier this year.

Maimane was among several patrons who came face to face with three armed men who stormed the Cape Town bar and robbed people of their belongings.

He said he was hosting his brother-in-law when the incident took place. Maimane said the suspects told them to all lie on the floor and began robbing them one by one.

“People who were in the restaurant were equally traumatised and so everyone had to give statements. Fortunately, no one was hurt. Some of the items were left on the side of the road as the chase went through,” Maimane said.

Britney Spears bares it all in full frontal exposure post