Zelensky denounces the airstrike on Saturday on the Odessa port, calling it "Russian barbarism 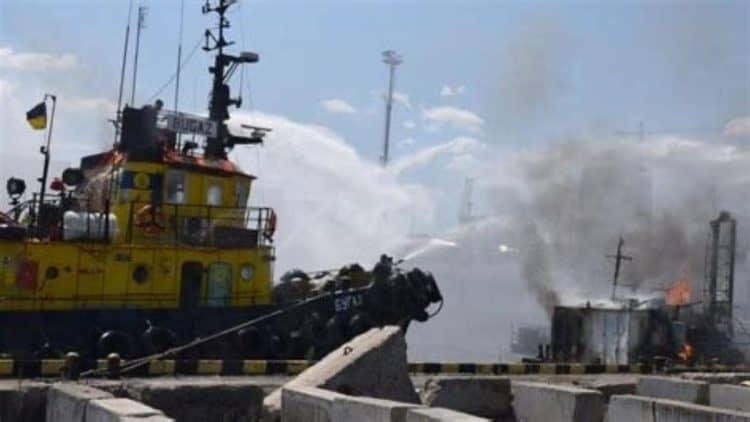 Russian missiles hit Ukraine’s Black Sea port of Odessa just hours after Kyiv and Moscow signed deals to allow the exports of grain to resume. Ukraine’s foreign ministry denounced Saturday’s airstrikes as a “spit in the face” on the United Nations and Turkey, who brokered the deal.

Russian defence ministry officials said that an attack on the port of Odesa, less than a day after an agreement deal was signed by Russia and Ukraine on resuming grain shipments from the port, was only striking military targets.

“In the sea port in the city of Odessa, on the territory of a shipyard, sea-based high-precision long-range missiles destroyed a docked Ukrainian warship and a warehouse with Harpoon anti-ship missiles supplied by the US to the Kyiv regime,” ministry spokesperson Igor Konashenkov said at a daily briefing on Sunday.

“A Ukrainian army repair and upgrade plant have also been put out of order,” the ministry said in a statement on Telegram.

Ukrainian President Volodymyr Zelensky said in his nightly televised address Saturday evening that the attack on Odessa, one of the three designated port hubs under the deal, “destroyed the very possibility” of dialogue with Russia.

Zelensky denounced Saturday’s strike on the Odessa port calling it “Russian barbarism” and said this is a sign of desperation after the warring sides struck a deal to release exports from the facility.

“Even the occupiers admit that we will win. We hear in their conversations all the time, in what they tell their loved ones when they contact them,” said Zelensky.

The Ukrainian military said on Saturday that Russia had attacked Odessa’s Sea port with four cruise missiles, two of which were shot down by the Ukrainian air defences.

Russian President Vladimir Putin calls the war a “special military operation” saying it is aimed at demilitarising Ukraine and rooting out dangerous nationalists. Kyiv and West call this a baseless pretext for an aggressive land grab.