In a recent shocking clip, residents in the Western Cape witnessed first-hand a tornado making its way through Swellendam. 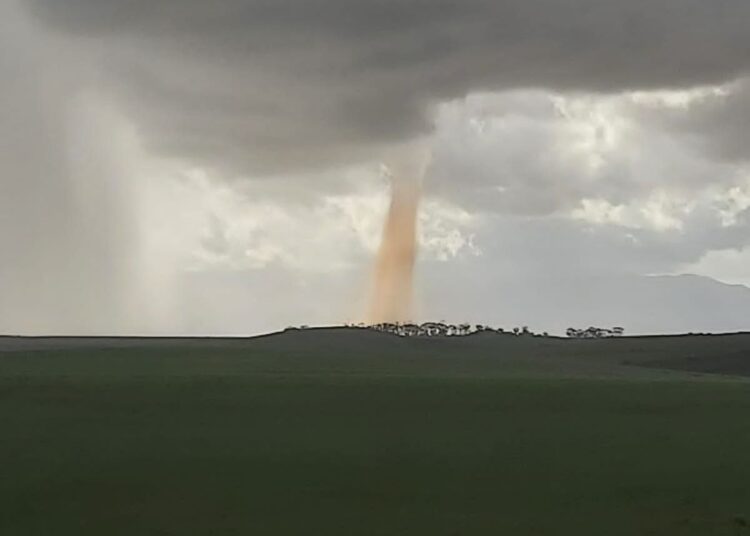 A Tornado was recently spotted in Swellendam. Photo: Rita Oosthuizen

Did the Western Cape just witness a tornado?

This past Monday, residents in Swellendam witnessed a tornado that swept through the rural area in a viral clip that has made its way on the internet.

Tornado makes its way through Swellendam

Thus far, the South African Weather Service is yet to confirm whether this was in fact a tornado or not. However, the current footage pretty much gives us the answer.

In footage posted by many individuals, a brown cloud can be seen swirling on the rural grounds of Swellendam with something sounding like thunder being heard throughout the clip.

Right now, there aren’t any reports of any injuries. Since the tornado made its way in Swellendam and has been interpreted as something out of a movie. As something like this has never been witnessed before.

While Cape Town has somewhat experienced snow for the first time a few years back and has since been one of the most exciting things residents have witnessed thus far. But, the same can’t be said for the tornado which can be disastrous.

To date, the South African Weather Service will be investigating the footage to observe exactly what was going on this past Monday. The public will be informed about the future developments regarding the matter as of late. They are currently not labeling the incident as a tornado.

Presently, tornadoes are usually formed when warm air meets cold air. In effect, this can cause a thunderstorm that spins around as a result of winds blowing it in different directions. This can essentially clear up a pathway for at least 50 miles.