Iziko South African Museum, in collaboration with Dijondesign (heritage consultants for the Lesotho National Museum and Art Gallery), have created a virtual exhibition of the delicate figurines. 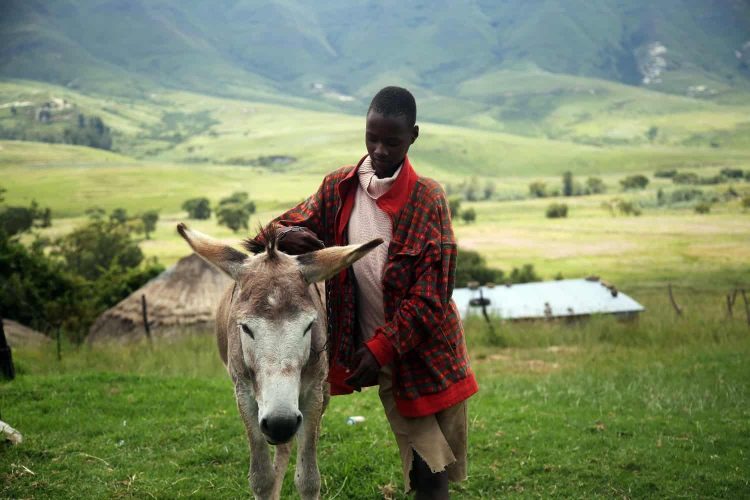 Photo by Angelo Moleele on Unsplash

The start of the news broadcast on Radio Lesotho is signalled by an unforgettable vibrating sound, rather harsh, as if made by a large bird. This is the lesiba, a musical bow. The lesiba was played by boys and men as they herded cattle, before radios and cellphones began to take the place of the national musical instrument.

Nowadays, there is little apparent concern for maintaining interest in the lesiba at school or any other national level in Lesotho. The unique sound of the instrument – once evocative of a rural way of life – seems to exist in a disconnected, disembodied fashion on the radio.

And the people who do still play Lesotho’s traditional instruments – musicians, instrument builders and innovators of their art – are seldom recognised or rewarded for their expertise.

But a collaboration led by the South African College of Music at the University of Cape Town, aims to return attention to Lesotho’s musical tradition. The collaboration involves filming musicians and exhibiting related artworks. We recorded musicians playing four instruments that are also depicted in clay figurines made by the late Lesotho artist Samuele Makoanyane (1909-1944).

Iziko South African Museum, in collaboration with Dijondesign (heritage consultants for the Lesotho National Museum and Art Gallery), have created a virtual exhibition of the delicate figurines.

They used photogrammetry – recording, measuring, and mapping – to make 3D digital models of the sculptures. These digital models are between 8cm and 18cm in height. They allow for detailed and interactive exploration. The figurines are being exhibited through Iziko South African Museum. The new Lesotho National Museum and Art Gallery will also show them at its official opening in 2022.

We also worked with the Morija Museum and Archive, the Morija Art Centre and the Lesotho National Museum and Art Gallery to create a film. Called Music in the Mountain Kingdom, it documents Lesotho musical culture and accompanies the exhibition of figurines. Before the pandemic lockdown, we had also planned to include live performances by the musicians at the exhibitions.

The seven exquisite, little-known clay figurines in the exhibition were made by Makoanyane in the 1930s. They were commissioned by musicologist Professor Percival Kirby of the University of the Witwatersrand, in order to document Lesotho musicians and their instruments. Made in the age-old tradition of low temperature pit firing, they are extremely fragile. They are being cared for in the Kirby Collection of Musical Instruments at the South African College of Music.

Makoanyane lived mostly in Koalabata, in the Teyateyaneng District. This is about 89km north of Lesotho’s capital, Maseru. To make the figurines, he worked from pictures in Kirby’s 1934 tome, The Musical Instruments of the Native Races of South Africa.

The Morija Museum and Archive, Lesotho’s oldest and best known museum, also has 33 Makoanyane clay figurines in its collection. The museum helped to find living musicians to perform on four of the instruments depicted.

We recorded five musicians for the virtual exhibition. An older woman, Matlali Kheoana, plays the lekope (unbraced mouth-resonated musical bow) and the sekebeku (jaws harp). Sekebeku is technically not part of the collection, but a modern manufactured instrument similar to the setolotolo in the collection.

Although two instruments were doubled, the performers played very differently. In the case of the segankhulu, they even constructed their instruments differently. The lesiba and segankhulu seem to still attract younger, innovative players. But the lekope is particularly at risk and Matlali Kheoana is in all likelihood one of the last few performers of this instrument. https://player.vimeo.com/video/419949659 Music in the Mountain Kingdom, directed by photographer Paul Weinberg.

Live performances at the exhibition would have provided the musicians with exposure and possible earnings from their expertise. Other outcomes could have included workshops and demonstrations at universities or through museum programmes.

We are still working on creating learning and teaching materials for the study of Lesotho music. We hope that the repatriation of the music and musical instruments through the exhibition and film will revitalise Basotho interest and the pursuit of a sustainable indigenous music culture.

Man imprisoned for committing over R1.6 million in vehicle fraud

South Africa goes into Level 2 lockdown: Here are the rules