Springbok coach Jacques Nienaber praised his team’s fighting spirit to grind their way to a crucial 36-20 victory against Argentina. 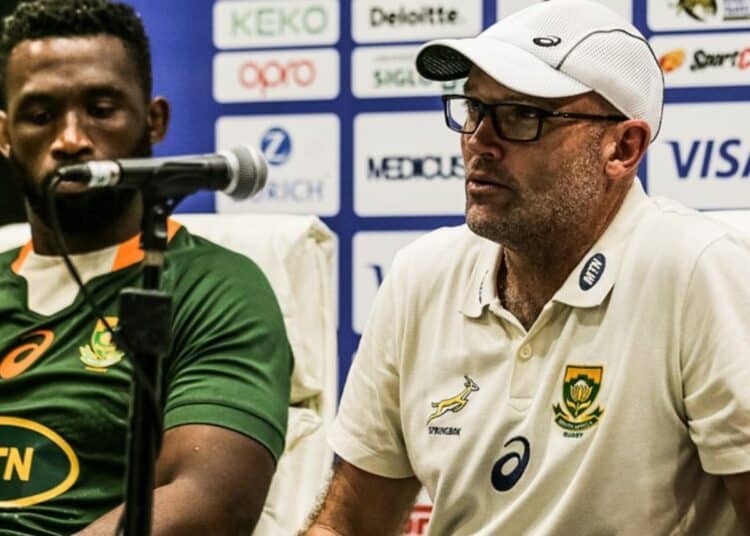 Following this Castle Lager Rugby Championship win on Saturday, the Springboks of Nienaber now match New Zealand on 14 log points going into the final round next weekend.

The Springboks held a comfortable 22-6 halftime lead and weathered a strong fightback from the hosts before scoring two tries in the last six minutes to seal the bonus point, which kept them in the title race going into next week’s tournament finale against Los Pumas in Durban.

“This was a semi-final for us, and it was a game of two halves,” said Nienaber.

“In the first half we played well and didn’t lie down, and then they fought back and we conceded penalties. But I must take my hat off to the players for keeping such calm heads toward the end of the game to pull it through.”

Springbok captain Siya Kolisi was equally proud of his charges and said: “Our mindset was to come here and get maximum points, and even though the momentum changed in the game we always believed we could get the win, and we knew that involved using our opportunities.

“We had a good start to the game and Argentina came back nicely, but the biggest thing was to stick together as a group, and we said we want to win the Castle Lager Rugby Championship.

“The coaches believe in us, and we believe in ourselves, and we have ambitions of doing much more. I’ve heard the match in Durban is sold out and we are excited to get home for a big game next week. We are looking forward to it.”

Nienaber was uncertain about the extent of flyhalf Damian Willemse’s injury after he fell to the ground following a tackle.

“I have yet to speak to the medical staff about Damian’s injury,” Nienaber said.

“We will assess the injuries in the next two days and then make decisions on whether we have to bring in players next week. We only arrive in South Africa in the early hours of Monday morning, so it will be a short week for us but both teams will be in the same situation, so we will be on level playing field.”

Kolisi thanked the Springbok supporters who stuck behind the team in what he described as a “tough week” which was compounded by a number of disturbing allegations against the team.

“It was great to get this this win for our country and the people behind us,” said Kolisi. “That is always our ambition as a team. This week we made a point of working as hard as we can despite everything happening around us.”

Nienaber said the attempts to derail the team in the media hours before the match made the victory showed the true spirit of this team: “I am not sure who planned to disrupt the team with disturbing allegations five hours before the match, but there was nothing we could do about it. All credit to the players for remaining composed and showing their character in the way they played.”