During the opening of his fashion show, Kanye West sported a White Lives Matter shirt which sparked a lot of criticism. 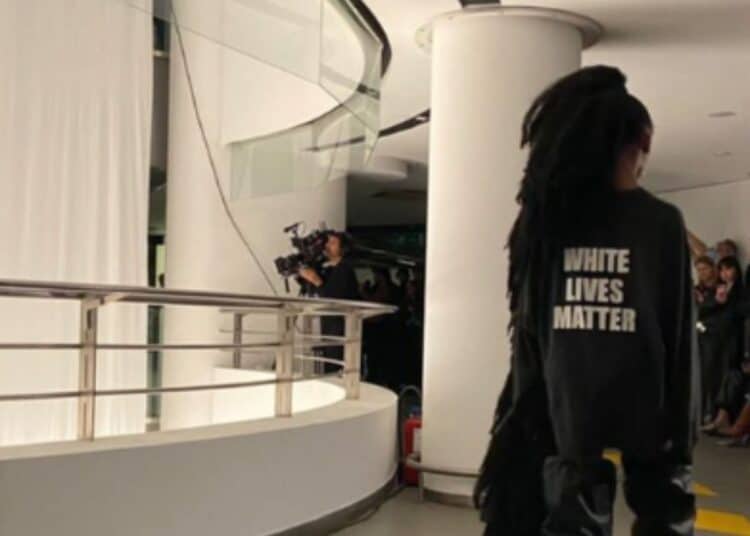 Kanye West is no stranger to controversy but the star’s recent fashion show may have gone too far.

In a recent surprise fashion week show this past Monday, Kanye West made an interesting choice in using shirts that read White Lives Matter. Kanye West was not the only person wearing the shirt as many of his models also wore the shirt on the runway.

Right now, it is not clear what the rapper’s intent with the shirts was as no statement has been made about it. However, the responses to the recent show were met with much frustration.

As shared by Billboard Magazine, White Lives Matter is a racist phrase that was previously used by the Neo-Nazi group. That started the movement in opposition to the Black Lives Matter Movement.

In the current racial struggle in America, this statement was met with extreme anger and frustration. By those who have fought hard against the oppression people of color experience in America to date.

Previously, Ye walked on an unconventional runway that was covered in mud. It is alleged that the rapper was also covered in mud during his walk on the muddy runway. The second show on Monday recently came as a surprise. With Kanye West making one message clear, that the world is at war.

Presently, it is unclear how the rapper intends to remedy the situation. As the entire black community is up in arms about the recent statement Kanye West made in his last-minute fashion show

Thus far, public figure Boosie Badazz share his view on the recent controversial show. Jayden Smith was also one among many who expressed fury at the statement and shared “True Leaders Lead.”

@kanyewest AFTER ALL WE BEEN THROUGH AS A RACE YOU PUT THIS DISRESPECTFUL SHIT ON‼️U GIVES NO FUCKS ABOUT HOW BLACKS HAVE DIED N SUFFERED TO THE HANDS OF THE WHITE MAN😞 N U SAY BUSH DONT LIKE BLACK PEOPLE.. REALLY “NIGGA”