Never miss out on you favourite TV series filled with suspense and drama in this months 7de Laan! 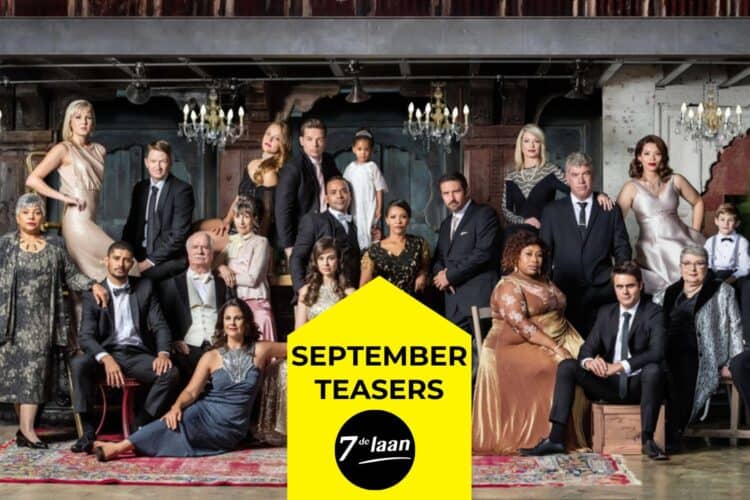 Tanya is determined to get to the bottom of things and plays detective. Amorey ropes Tjattas in to babysit Nelo.

Mariaan is outside of her comfort zone. Vee helps Aggie decide on a name for her company’s talent competition.

Romeo asks his friends to be his groomsmen in a fun and creative way. Tiaan and Vanessa catch up when he reassures her that he’s not back to his old ways.

Zee and Uys are not happy about being paired up in a team for the talent competition. Alexa draws the wrong conclusion when she overhears Lesedi’s conversation with Aggie.

Tiaan gives Uys perspective about life without a father. Karmen desperately wants to compete in the talent competition but Vanessa halts her plans.

Mariaan is pleased that her scheming is going according to plan. Romeo and Khethiwe look forward to a romantic evening.

Zee steps in to help Uys when his car breaks down. Vanessa is jealous because Aggie’s talent competition is progressing well.

Denzil decides on the act he’s going to render for the talent competition. Uys invites Zee for dinner when his friends are unavailable.

Shady is in good spirits and decides that it would be her best year yet. Romeo and Tjattas are shocked when they listen to the voice note messages on the Heights’ WhatsApp group.

Khethiwe is not impressed with Shady, who she thinks has an insistent need to always be the centre of attention. Tiaan gives Fikani food for thought.

Denzil discovers that his body isn’t as flexible as he thought. Amorey opens up to Fikani about her family woes.

The Hillsiders prepare for the talent competition. Fikani is prepared to go to great lengths to see his plan through.

Thomas and Uys bond when they talk about their fathers. Shady receives exciting news.

The talent competition gets underway, Karmen impresses the audience with her magic trick while Ivy renders a sentimental item.

Alexa struggles to come to terms with where her life is at. Aggie is on a high after a successful event.

Fikani reassures Amorey and invites her to spend time with Nelo. Bonita is concerned about the direction in which Shady’s life is heading.

Chris calls Fikani for medical assistance. Lesedi is involved in an accident.

Khethiwe is livid when Shady doesn’t show up for an important meeting. Denzil asks Chris about Mariaan’s whereabouts.

Premiere episodes of 7de Laan air on SABC2 from Monday’s to Friday’s at 18h00.

Follow the daily catch up for 7de Laan this September right here!