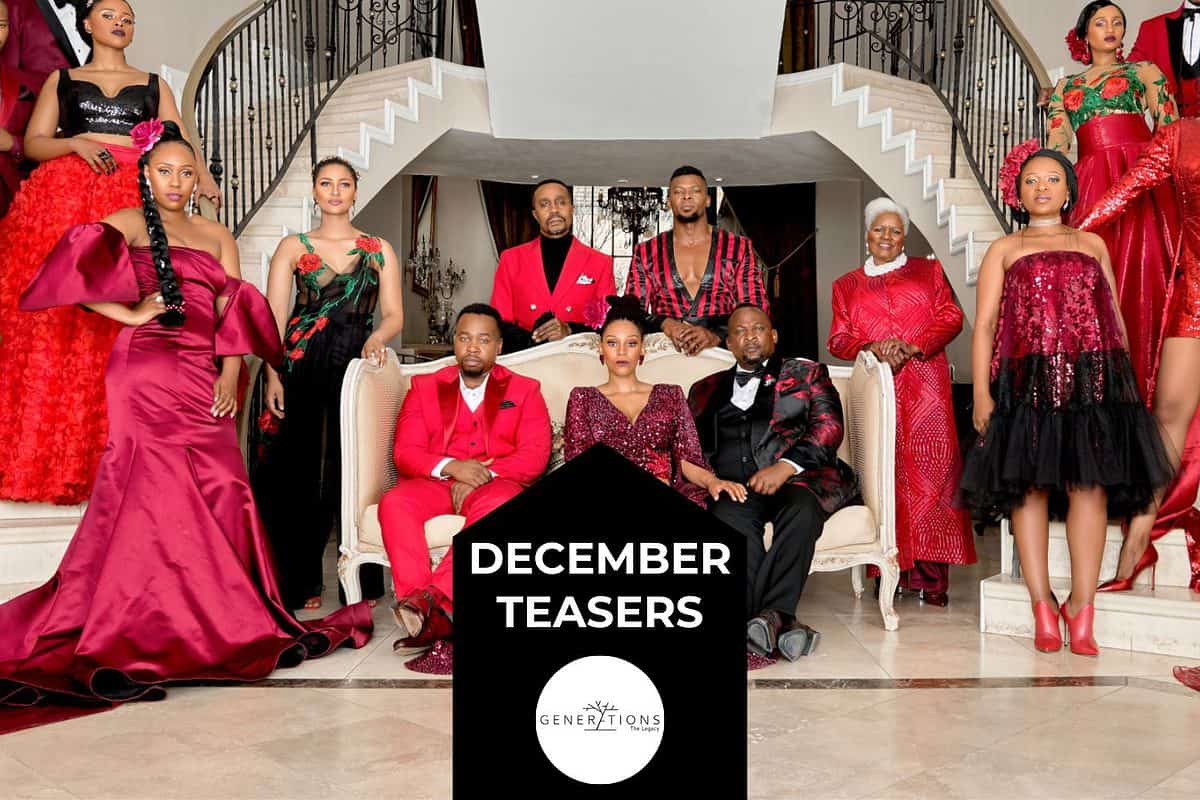 Coming up on Generations this December 2022.

Mazwi is at a loss regarding what to do about his great uncle. Has Pele pushed his luck too far this time? Sphe decides to rope in the help of a hungry reporter.

Why would Busisiwe want to take a nurse out to lunch? Kabisi’s revelation leaves Fikile floored and confused. Guess who is back in town – or rather, back from the dead?

Mbali considers breaking the rules to get what she wants. A sick minded criminal enjoys getting his own back. Mpho and Zanele get played by a master manipulator.

Ayanda makes a horrifying discovery. Lucy is furious to hear they were misled by their own kin. Mazwi is shocked by what he walks in on at the hospital.

Things get heated when the exes have it out. The Diales aren’t sure how to handle an imminent threat. Sphe lies to a friend about what happened with Mageza.

The police find a bloody knife with a bloody fingerprint on it… Kabisi wakes up in a cold sweat and is riddled with guilt. Mbali fights for what she believes she deserves.

Luyolo gets suspicious when he sees who’s messaging his mom. Fikile tries to talk the fire back into her man. Ayanda freaks after Mpho’s revelation. Is she going mad?

Oby is enraged when her plan is thwarted. Cosmo unwittingly undermines Mocha Mamas’ new manager. Sphe’s lawyer has some shocking news for her.

Mbali is having a hard time controlling her staff. Worried Pele panics when he realises his keys were taken. A conciliatory dinner ends in a cat fight.

Ayanda is a complete mess. Is there any hope for her? Busisiwe is deeply hurt after Luyolo’s scathing attack. Fikile is offered a way out. Will she take it?

Nkosiyabo feels desperate times call for desperate measures. Has Mocha Mamas’ new manager bitten off more than she can chew? Sphe is grateful she won’t have to fight the Mlambos alone.

Oby reveals the truth and it’s even more horrific than expected. Donald is furious about the article in the paper and vows to deal with it. Mazwi succeeds in planting doubts in Kabisi’s mind.

Ayanda realises just how powerless she is against her tormentor. The doors keep closing but Mbali refuses to give up. Nurse Zodwa finds herself buckling when Pele ups the pressure.

Can the witch’s lackey be trusted to do the job? Fikile is upset and offended when her intentions are questioned. The Mlambos don’t like being pushed into a corner.

Two men writhe helplessly as death looks them in the face. Sphe and Luyolo are caught on the back foot. Kabisi is miserable without the woman he loves.

Melokuhle is reluctant to break bad news to her friend. Mazwi’s conversation topic is working on Tracy’s nerves. Two ex-lovers feel an old but familiar spark…

Ayanda wants to witness something gruesome in order to find peace. Zanele is not ready to trust Pele yet… not by a long shot. Nkosiyabo is delighted when he overhears a juicy piece of gossip.

Fikile doesn’t hide that she doesn’t like her friend’s lover. Mrekza struggles to stop his wife from flying off the handle. Sphe receives a subtle threat which leaves her worried.

Donald does a complete turnaround but with ulterior motives. Mbali is furious when she realises her family tricked her. One friend warns another against going behind her lover’s back…

Busisiwe is shocked by the argument she witnesses. Lucy is caught off guard when her daughter calls her bluff. Ayanda gets not one but two major shocks in one day.

Nkosiyabo confronts Nozipho and is impressed despite himself. Cosmo warns Mpho to keep his nose out of Diale business. Luyolo is on a snooping mission. What is he hoping to find?

Follow the daily catch up for Generations this December 2022 right here!