King Charles III is a few days in as the successor of Queen Elizabeth II and while making it official, the royal felt irritable. 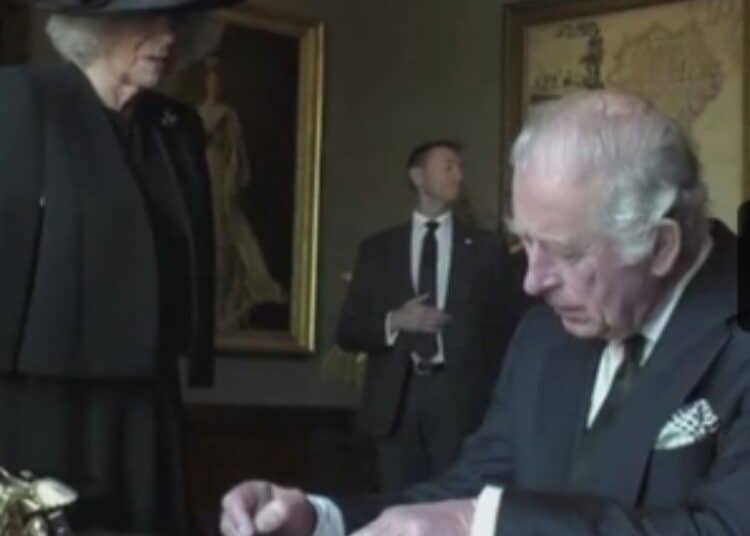 King Charles III and his siblings recently honored the late Queen Elizabeth while marching behind her coffin from Buckingham Palace to Westminister Hall. But, the new King recently caught the eye of the media for other reasons.

To make things official, King Charles III was expected to sign succession papers. That would finalize matters for the new King. However, the new monarch found some difficulty while signing the papers.

As of late, the new successor was pictured motioning for someone to remove the extra inkwells from his desk where he was made to sign official documents. While signing the documents, King Charles III found his hands to e covered in ink which frustrated the monarch.

Thus far, the short clip shows the monarch getting up from his seat and sharing his frustration with the inkwell. The King shared something by the likes of “Oh, God, I hate this” right after handing the pen over to his wife Camilla whose title is now Queen Consort.

Recently, the late Queen Elizabeth II’s body has traveled to Edinburg and has since gotten back to London. King Charles II, Princess Anne, Prince Edward, and Prince Andrew followed their mother’s coffin. In a short march to the Westminister Hall, where the Queen is expected to lie in state for four days until the funeral.

To date, Prince Harry and Prince William also followed behind the senior royals. While Meghan and Kate did not follow on foot, the royals followed the proceedings by car.

Right now, Prince Andrew will wear his military uniform on the day of the funeral. As a sign of his final respect for his late mother and Queen. The official date of the funeral has been shared to be the 19th of September.