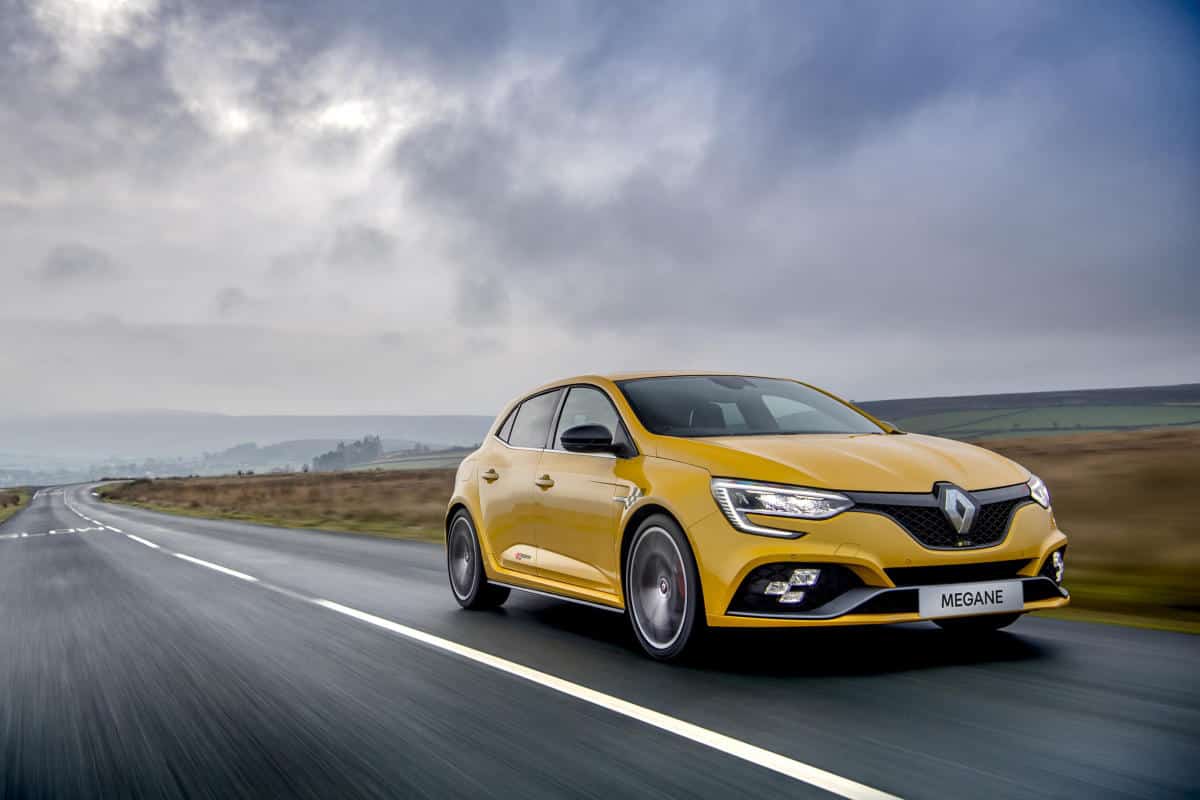 The R.S. 300 Trophy marks 18 years of the iconic MEGANE R.S. line-up, with pure excitement inherent in its DNA.

The Trophy models are celebrated for their thoroughbred efficiency combining performance and accuracy, and the New Renault MEGANE R.S. 300 TROPHY certainly lives up to this legacy.

Those with the ‘need for speed’ can look forward to an all-round performance car that combines intense everyday driveability with even sharper on-track performance.

Aside from its unique and undeniably spectacular looks, the TROPHY offers a multitude of enhanced Renault Sport features, namely:

The interior presents another step into the R.S. world with its Alcantara seats, finished with racy red top-stitching.

Other R.S. specific design cues within the cockpit include the Double-diamond steering wheel with leather, the Aluminium gear lever knob, and handbrake gaiter.

A dual-clutch EDC gearbox, mated with a 4-cylinder 1.8 litre high performance turbo engine, enables a remarkable power output of 300hp/ 221kW at 6,000 rpm, with 420 NM torque at 3,200 rpm, thanks to the development in the turbo and exhaust notably benefitting from technology pulled directly from Formula 1.  Top speed is an exhilarating 260 km/h, with 0 to 100 km/h reached in a mere 5.7”.

The R.S. driving experience is further enhanced through advanced technology such as the bi-material front brakes with distinct red Brembo callipers not only add to the overall aesthetics but also allow for guaranteed optimum braking performance.

The multitude of equipment onboard include features such as Dual Zone Climate Control, cruise control with speed limiter, Renault hands-free card, and automatic lights and wipers, so driving comfort and safety come standard too.

The New MEGANE R.S. 300 TROPHY model is the crème de la crème of Renault Sport, with limited units available (and only 55 locally), making it an exclusive vehicle to own.

The phenomenal MEGANE R.S. model is now 18 years old, with the first edition having launched in 2005, only 9 months after the release of the first Megane II R.S.

Each new version has been an ode to the Renault Sport world with astounding technical prowess.

The distinct and sophisticated design of the New MEGANE R.S. 300 TROPHY is further accentuated by its sporty side panel Trophy insignia, F1-style splitter and rear diffuser, while the Jerez Triple Tone 19” wheels with bold red styling give the Trophy an imposing stance.

Stepping into the cabin one is encountered with a definite nod to the motorsport world, with many elegant yet sporty touches, the Double-diamond steering wheel with paddle shifters, the Aluminium gear knob lever, the handbrake gaiter and the racy red top-stitching on the seats.  The epitome of R.S. design and comfort have to be the seats, kitted in Alcantara upholstery, which contribute to giving perfect support under driving conditions.

Another enthralling feature is that of the Multi-Sense Driving modes technology , where the flick of a button enables you to select your driving mode  – Either MySense (Normal), Sport or the ultimate Race mode.

The New MEGANE R.S. 300 TROPHY benefits from all the innovations within the MEGANE R.S, such as the 4CONTROL four-wheel steering system which enables a smaller turning radius, better stability, a quicker steering response, which is ideal for better track lap times giving you that much added fun and peace of mind safety.

At low speeds, the system turns the rear wheels in the opposite direction to the front wheels.  At speeds of over 60km/h (100km in Race mode), all four wheels turn in the same direction, ensuring optimised roadholding.

The Cup chassis is standard and boasts stiffer suspension with a Torsen mechanical limited slip differential, allowing for better corning and traction.  The front brakes are state of the art with bi-material discs for better endurance while the Brembo brake callipers guarantee optimum braking performance.

Four Hydraulic Compression Stops, technology borrowed from the world of racing/ give the MEGANE R.S. 300 TROPHY uncompromised behaviour.  This remarkable complete chassis package not only increases the performance of the vehicle but it allows for improved comfort.

The MEGANE R.S. 300 TROPHY features a best-in-class and fun-to-drive Cup chassis specially tuned for enthusiasts who crave the thrill of sporty performance Equipped with a limited slip differential, the Cup chassis delivers dependable efficiency at all times, regardless of grip conditions or driving style, paired with Launch Control and Multi Change Down on the gear change pedals.

The valve position provides two exhaust tones, depending on the engine speed and load. When open, the load causes reduced flow resistance, enabling the gases to be routed along a more direct path, which allows the engine’s sporty and acoustic potential to be fully expressed.