A vehicle plunges into a giant road hole in Johannesburg, one which was dug to repair a water leak months ago. 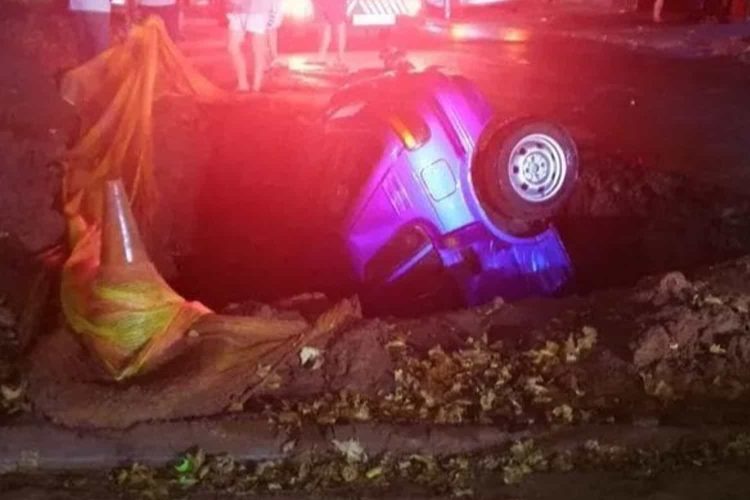 During the evening on Tuesday the 8th of March, a 74 year old man ended up trapped in his vehicle after driving into a giant hole left in the road in Johannesburg. Residents say the hole has been there for months, despite many members having reported it to the authorities. Many also complained that the hole is not easily seen, especially at night and in rainy weather, such as three was on Tuesday evening.

Why Was The Hole There?

The giant hole was apparently dug up in order to fix a water leak in the street. The issue is that this repair took place months ago, and the hole has been left there since. Even though nearby residents have logged multiple complaints about it being a serious hazard. Moreover, the intersection where the accident occured is a busy one. Crossing the busy road of Long street with 1st road in Greymont.

Ward 86 councillor Chantelle Fourie-Shawe confirmed that there had been many complaints about the hole. Adding that the hole had been opened up many times in the past few years, saying that “It has been a recurring problem”.

Clive Maher, from SCP Security, who responded to the accident said that the hole was not easily visible. Adding that “Obviously at night with the rain and poor visibility, and the roads being flooded, the person didn’t see the only emergency cone that was there.”

Maher also points out that the giant hole had been left in a busy Johannesburg road. Stating “This is a main road. It is not like a side road in the suburb.  It’s a well-used main road.”

Ward councillor Fourie-Shawe replied saying that the hole had been adequately cordoned off. However, “The material they used to cordon the hole sometimes sinks into the hole.”

Maher states that it took three people to remove the motorist from his vehicle. Saying “We first thought of the window but we managed to open the door and get the person out of the car.” But after a fairly quick extraction, the motorist had luckily not been seriously injured. Having come away with just a few scratches and bruises.