The four-year-old went missing last week , after she went to the nearby park with her playmate. 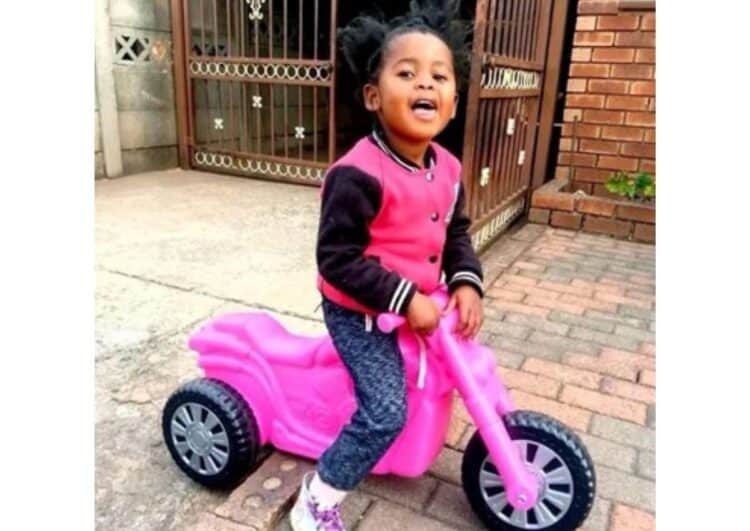 Bokgobo Poo playing with her scooter. Photo via Twitter: @joy_zelda

Members of the community who were searching for the missing remains of 4-year-old Bokgabo Poo, discovered a body in a dam near Dalpark, Ekurhuleni on Wednesday.

Some of the missing body parts of the child were found and the community members were out looking for additional remains of the child.

The four-year-old girl went missing last week, after she went to the nearby park with her playmate.

Her friend told her family that a stranger approached them and sent him to go buy sweets alone. When he returned, both the man and Poo were no longer at the park.

The next day, a woman found Poo’s leg buried in a shallow grave in her yard in Tamboville.

She alerted members of the community about the discovery and the police were called to the scene. The rest of the body which was confirmed to be the body of Bokgabo Poo was found in a nearby veld metres away from the house.

While residents were searching for other remains of the child, they saw a body floating in the dam in Dalpark, which is close to Watville- the area where Poo went missing.

“It is reported that the body was seen floating on the dam by community members who then alerted the police. The body is not yet identified, and the police investigations are underway,” Colonel Dimakatso Sello, the police spokesperson said.

Disgruntled community members chased police officers away saying they’ve had enough of crime in the area.

“They kill people for money, they kill kids for money, they rape people and dump them here but police are not doing anything. They just look and pass,” said Sibusiso Mazibuko, an angry community leader.