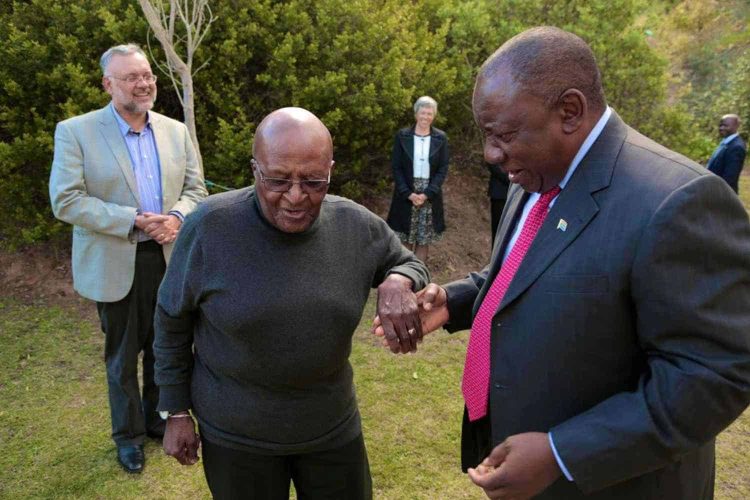 Archbishop Desmond Tutu celebrated his 90th birthday on Thursday, and amongst the flurry of well wishes, President Cyril Ramaphosa penned a heartfelt message to his longtime compatriot.

Tutu is one of the last custodians of a democratic South Africa and on his birthday, the president celebrated the archbishop as a constant reminder “that fellowship, solidarity, charity and compassion for the vulnerable are common to us all.”

“Yours is a life that has been well-lived in honesty, integrity, fearlessness and service to humanity in South Africa and globally. At times when we have found ourselves losing our way, you have taken us well to task,” the president wrote.

Ramaphosa adoration for Tutu is no secret. In 2018, at the height of his turnaround strategy as leader of the African National Congress (ANC), the interim president of South Africa, at the time, had paid the archbishop a visit at his home in Hermanus, Western Cape, where he unreservedly apologised for “putting him through a period where he lost confidence in the ANC’s leadership.”

“I am sorry. It was not a pleasant moment to hear you as the Archbishop, that we always loved, expressing your loss of hope and loss of confidence.

“I just wanted to say I am sorry we put you through that, but we will work very hard to regain your confidence and make you proud. We will do that,” he said at the time.

Three years later, with the ANC still rattled by factionalism and rampant corruption, Ramaphosa has not wavered from his promise to unbundle Tutu’s disappointment in the ruling party.

“We are further reminded that taking up the struggle for equality and social justice is not the responsibility of only government, civil society organisations or the clergy, but of us all. For nearly three decades, yours has been a voice of conscience, guiding us and motivating us to do better by our people,” Ramaphosa concluded.

A brief history on Tutu

Tutu is revered as the moral compass of South Africa. Born on 7 October 1931, the archbishop dedicated his life to human rights activism.

Tutu was raised in Klerksdorp by his mother Allen Dorothea Mavoertsek Mathlare and father Zachariah Zelilo Tutu in a methodist household.

His first encounter with former president Nelson Mandela was in 1951, at Pretoria Bantu Normal College, a teacher training institute. All that’s recorded in history about the meeting is that it was at one of the institution’s debates, back when Mandela was practicing law.

The two most influential voices of the modern era would not meet again until 1990. Between that period, while Mandela changed the fabric of South Africa’s political ideology, Tutu served as the archbishop of Johannesburg and Cape Town, after he was ordained as an Anglican priest and moved to the United Kingdom (UK) to study theology at the King’s College in London.

Decades of fighting for world peace culminated into a life where Tutu is held to high regard in his retirement, as South Africa’s treasure. On his 90th birthday, fans from all walks of life honoured the archbishop with heartfelt well wishes. Here are some of the reactions we picked out from social media:

Happy 90th birthday Archbishop Desmond Tutu. Thank you for making this world a better place through honouring your truth and speaking truth to power on matters of justice, integritity, forgiveness and peace #TutuTurns90 #TutuPL2021 #TuTuLegacy pic.twitter.com/RkMW3WaQJj

Happy 90th Birthday to the “Arch” – Emeritus Archbishop Desmond Tutu. Thank you for standing up against injustice and promoting peace. @TheDesmondTutu @TutuFellows pic.twitter.com/dIxTzgrDMX

In our African worldview, the greatest good is communal harmony. Anything that subverts or undermines this greatest good is ipso facto wrong, evil. Anger and a desire for revenge are subversive of this good thing.

Happy 90th birthday to this beautiful human being pic.twitter.com/klvjxAScPM

A very happy birthday to Archbishop Desmond Tutu who is 90 today! Wishing him a joyous and peaceful year ahead 💕🎂 pic.twitter.com/y7KxX2h5Cv

South Africa is tightening its rules around executive pay, but gaps remain