The group rejected the "illegal attempted annexation" of four areas of Ukraine and vowed to step up sanctions against Moscow. 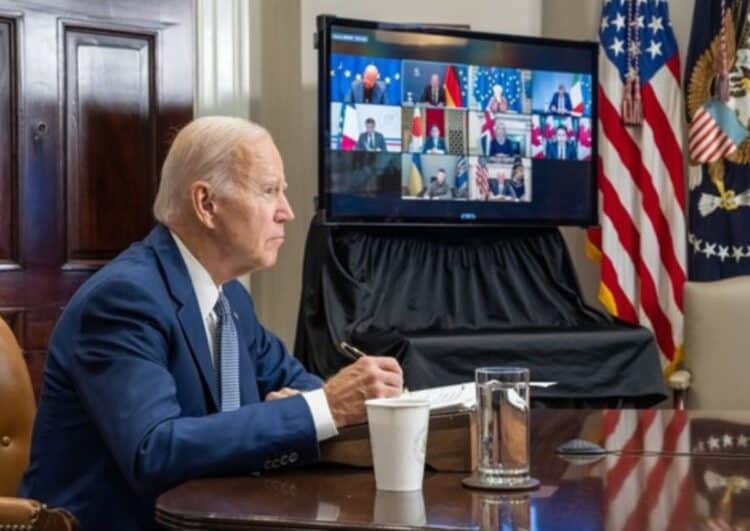 G7 partners hold an urgent meeting to discuss developments in the Russian invasion of Ukraine. Photo via Twitter: @POTUS

Putin and his forces have been accused of committing war crimes by the UK allies after a wave of missile and drone attacks on Ukrainian cities.

Ukraine President Volodymyr Zelensky repeated that he would not negotiate with Putin, a day after Russia launched its offensive hitting Ukraine with an intense barrage of airstrikes since 24 February when the invasion began.

Russia launched a further wave of missile and drone strikes on Tuesday, hitting power plants and civilian areas across Ukraine.

The blasts followed a barrage which killed 19 people and injured many more in city’s including Ukraine’s capital Kyiv on Monday.

After having a discussion on the crisis in Ukraine, the G7 leaders issued a statement vowing to “hold President Putin and those responsible to account.

The group rejected the “illegal attempted annexation” of four areas of Ukraine and vowed to step up sanctions against Moscow.

“We have imposed and will continue to impose further economic costs on Russia, including on individuals and entities- inside and outside of Russia- providing political or economic support for Russia’s illegal attempts to change the status of Ukrainian territory,” the G7 statement said.

The leaders also warned Moscow that any use of chemical, biological or nuclear weapons would have “severe consequences”.