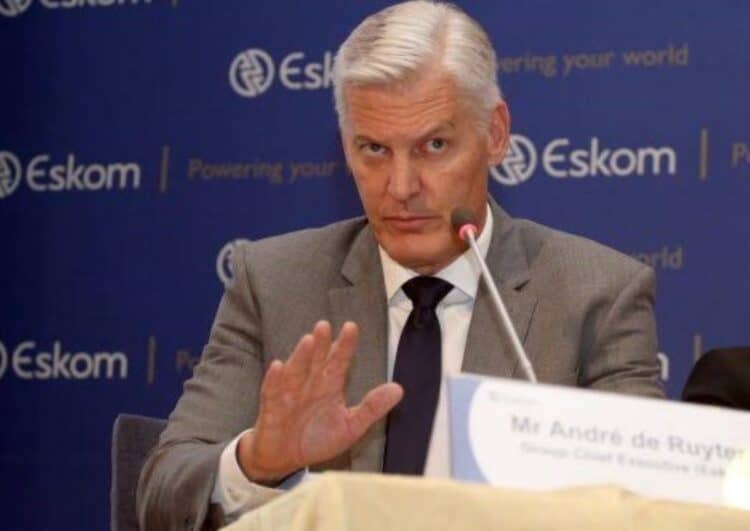 While South Africans battle with freezing conditions, they also have to deal with Stage 6 load shedding in the coming week, or that load shedding could reach higher stages before things get better, as announced by Eskom CEO Andre de Ruyter.

Tempers are running high following the implementation of stage 6 load shedding on Sunday- and Andre de Ruyter’s salary has come under scrutiny.

The embattled power utility announced around 4am on 18 September 2022, that it would be implementing stage 6 load shedding. Eskom had a media briefing at 10:00 on the very same morning where they briefed on what led to the escalation from stage 5 to stage 6 within a space of few hours.

“Following the tripping of a generation unit each at Kusile and Kriel power stations, Stage 6 load shedding was implemented effective at 04:16. Eskom appeals to the public to help conserve electricity.

WHO IS ANDRE DE RUYTER?

The Eskom CEO is not a popular man at the moment, with the electricity crisis getting worse by the day. Under his leadership at Eskom, we have not seen much progress with load shedding reaching as high as Stage six, with fears that the crisis could get even worse.

The crisis at Eskom did not start with him fair enough, but the power crisis is getting worse with fears that it could affect more jobs. The grid seems weaker than ever before and there are growing calls for De Ruyter to be sacked.

WHAT IS ANDRE DE RUYTER’S SLARY?

As of May 2022, Andre de Ruyter was earning R7.04 million per year. He’s more than R2 million better off than Calib Cassim, the Chief Financial Officer (CFO), who is on an annual salary of R4.9 million. The CEO has earned the same annual wage since 2020.

Love is blind After the alter: How things panned out for the couples