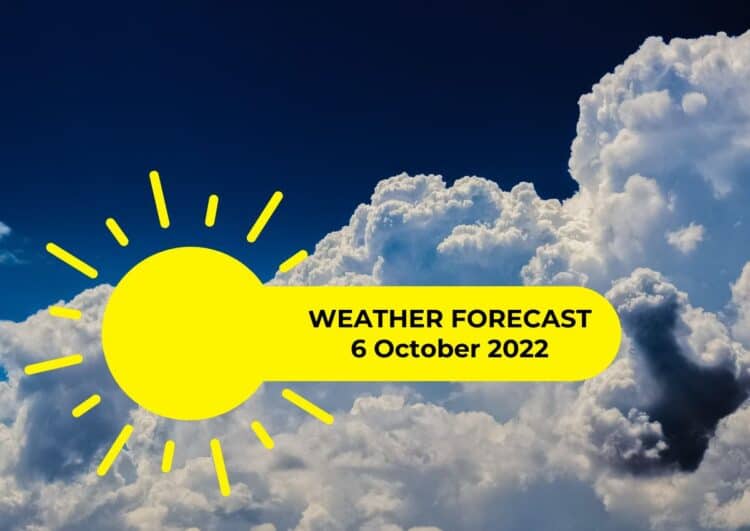 Make sure that you know what is going on with today’s Weather Forecast: 6th of October 2022.

Fine and hot, becoming partly cloudy in the south from the afternoon.

Fine and hot but very hot to extremely hot in the Lowveld.

Fine and hot to very hot.

Fine and hot to very hot, becoming partly cloudy from the afternoon.

It will be windy in the west.

Fine, windy and hot, becoming partly cloudy with isolated thunderstorms in the central and eastern parts from the afternoon.

Morning fog patches over the south-western interior, otherwise fine and cool to warm but hot in the north and north-east.

The wind along the coast will be moderate to fresh southerly to south-easterly.

Cloudy to partly cloudy in the south and west with light rain in the south-west spreading to the south coast by late afternoon, otherwise fine and cool but warm in the Central Karoo.

The wind along the coast will be moderate to fresh south-westerly.

Fine and warm to hot but very hot in places in the north. It will become partly cloudy in the afternoon with isolated showers and thundershowers.

The wind along the coast will be moderate to fresh north-easterly, becoming south-westerly in the afternoon.

This was the Weather Forecast for 6th of October 2022. Make sure not to miss out on any of the updates by bookmarking this page.